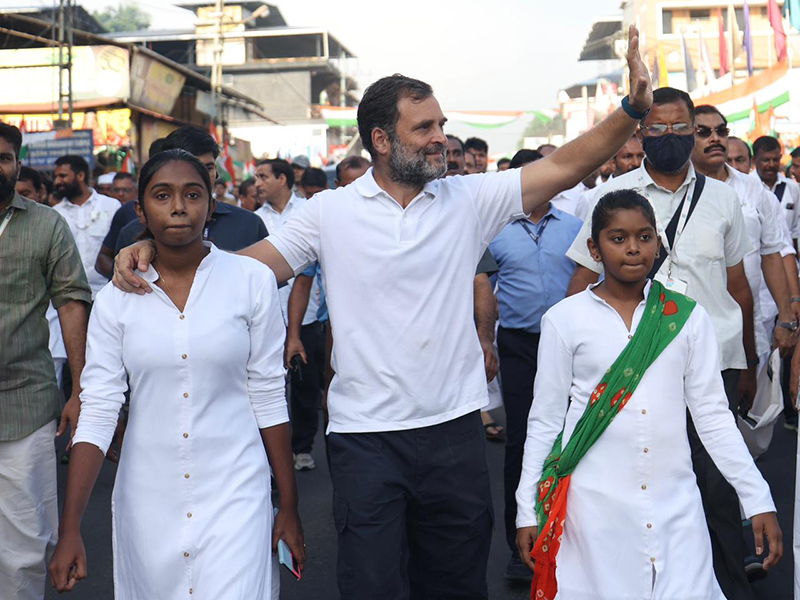 The 19th day of Kerala leg of yatra, which resumed from Chungathara in Nilambur at 6.30 am, halted at Vazhikadav at 8.30 am.

The yatra will resume from Amaikulam in Gudalur at 4.45 pm to reach Gudalur Bus Stand in Tamil Nadu at 6 pm.

The yatra witnessed a huge turnout with the involvement of thousands of people who lined up on both sides of the road to extend their support to the Wayanad MP.

During the Yatra in Wayanad on Wednesday evening, Kerala's first adivasi filmmaker, Leela Santosh, joined the Jodo Yatra and interacted with Rahul Gandhi. Lending support to the voice of adivasis, her first documentary threw light on the life and rituals of Paniya community of Wayanad, the constituency of Rahul.

Over 19 days in the state, the yatra will cover 7 districts over 450 kms, before it commences in Karnataka on Oct 1.

The Bharat Jodo Yatra is a five month, over 3,500 km-long foot march from Kanyakumari to Srinagar.

It is part of the party’s national mass outreach program aimed at highlighting social polarisation, economic inequalities and political centralisation.