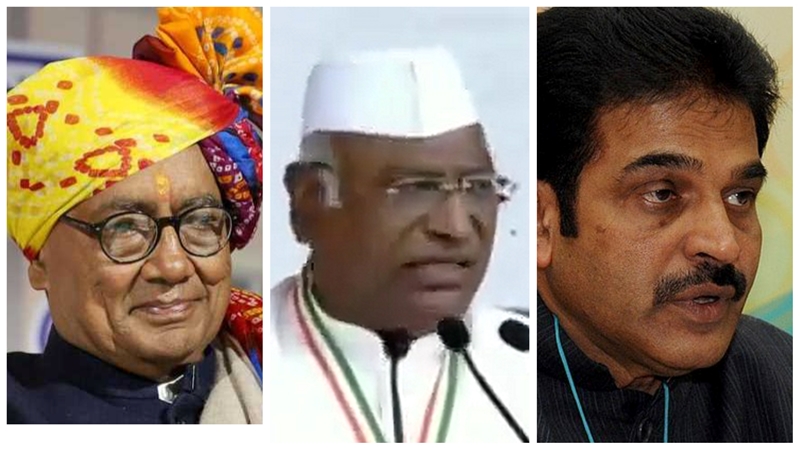 Rajasthan Chief Minister Ashok Gehlot, who was a favourite of the Gandhis for the Congress president's post, is now out of the race as he allegedly sponsored a rebellion of his supporter MLAs, who threatened to resign if the party elevated his bitter rival Sachin Pilot as the new CM, media reports said.

According to an India Today report, KC Venugopal, Digvijaya Singh and Mallikarjun Kharge are now running for Congress's top leadership.

Media reports also suggested that senior Congress leader Kamal Nath could also contest for the top post and he was appointed by the Congress High Command to mediate between Gehlot and Pilot factions.

However, Kamal Nath on Monday said that he will not speak to Ashok Gehlot. “Neither am I filing any nomination papers (for the Congress chief poll) nor will I speak to Gehlot,” Kamal Nath said, according to India Today.

"He (Ashok Gehlot) is out of the Congress presidential race. There will be other leaders who will file the nomination before September 30. Mukul Wasnik, Mallikarjun Kharge, Digvijaya Singh, KC Venugopal in the race," a Congress leader was quoted as saying by India Today.

"The way Gehlot behaved hasn’t gone down well with the party leadership. They are very upset with him,” said another leader who is a CWC member, the report said.

He said the rebellion was a "mistake", and it "should not have happened", but Kharge made it clear the MLAs couldn't have made such a strong move without his consent, reported NDTV.

The report said that Gehlot's move, which clearly undermined the top brass, could cost him his shot at the top Congress post.

Sunday evening, Gehlot-loyalists skipped the big Congress meet to pick up the next chief minister while asserting that any possible move to appoint, Gehlot's bitter rival Sachin Pilot wouldn't be tolerated.

The revolting MLAs held a meeting and passed a resolution that they would quit if Sachin Pilot was appointed chief minister of Rajasthan at MLA Shanti Dhariwal's residence.

They raised the issue of Sachin Pilot's rebellion in 2020 and asserted that the chief minister should be picked up from among those who supported the government at that time.

They insisted that the meeting to choose the next CM should be held after the next Congress president is elected.

To this, Ajay Maken said: "It would be a conflict of interest as the resolution would be passed when Ashok Gehlot may already be party chief. So, he empowers himself to decide on his own successor in Rajasthan."

The show of defiance hasn't gone down well with the Congress leadership and Maken has termed it "indiscipline".