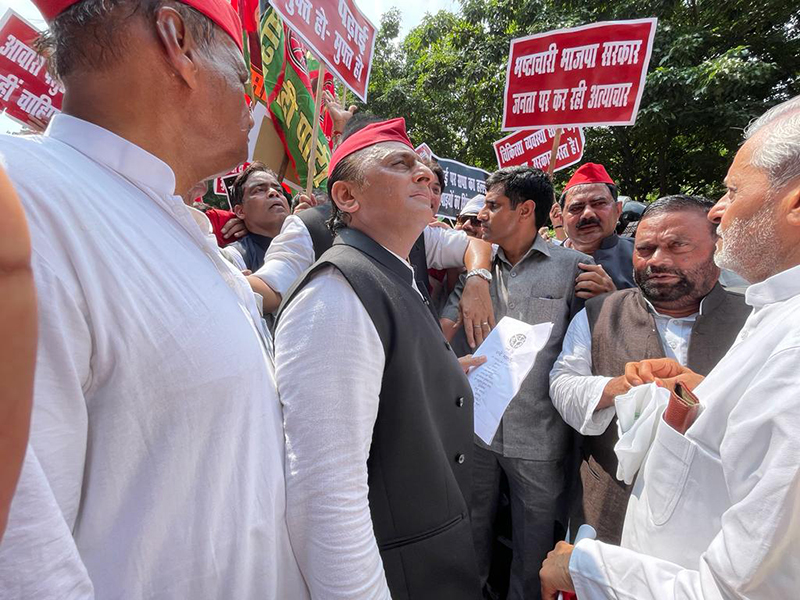 Lucknow/UNI: Samajwadi Party (SP) President Akhilesh Yadav Monday said the Bharatiya Janata Party (BJP) government in Uttar Pradesh does not want to face the opposition as it has failed on all fronts.

Akhilesh Yadav said this after being prevented from marching towards the Assembly with his party MLAs.

"What type of a government is this which is not allowing MLAs and former Ministers to reach the house? After all, we wanted to raise the issues related to the public.

Uttar Pradesh Chief Minister Yogi Adityanath took a jibe at Samajwadi Party and said that expecting the party to follow rules or courtesy was a "farfetched dream".

"There is no harm if any party or an individual states his views democratically. It is their moral duty to seek permission.

"If they would have sought the permission, the police would have granted the same. But expecting SP to follow any rule or courtesy is a far fetched dream," he said.

Earlier, SP MLAs and MLCs led by Akhilesh Yadav attempted to march towards the Vidhan Bhawan from the party office to raise the issues of price rise, unemployment, crime against women and law and order situation in the state.

However, they were prevented from marching via Raj Bhawan at Bandariya Bagh crossing.

The MLAs insisted on marching ahead but they failed to do so as the road was barricaded.

After this the MLAs led by Akhilesh Yadav staged a protest on the road and conducted the proceedings of the House by paying tributes to former Bharatiya Janata Party (BJP) MLA Arvind Giri, who had passed away recently.

After calling off the protest, Akhilesh Yadav alleged that corruption is rampant in the present government.

"Everything is becoming costlier. The dream of jobs and employment they showed to the youths turned out to be a farce.

"Today employment is being snatched from the youths by privatising everything. The youths are not satisfied with the Agniveer scheme."

The Samajwadi Party chief will sit with his MLAs and chalk the future course of action.

Meanwhile, the police said that SP MLAs were prevented from marching towards the Vidhan Bhawan as they had not sought prior permission for the same. An official said that though permission was not taken, an alternate route was suggested, but the MLAs were not ready to march on the designated route.