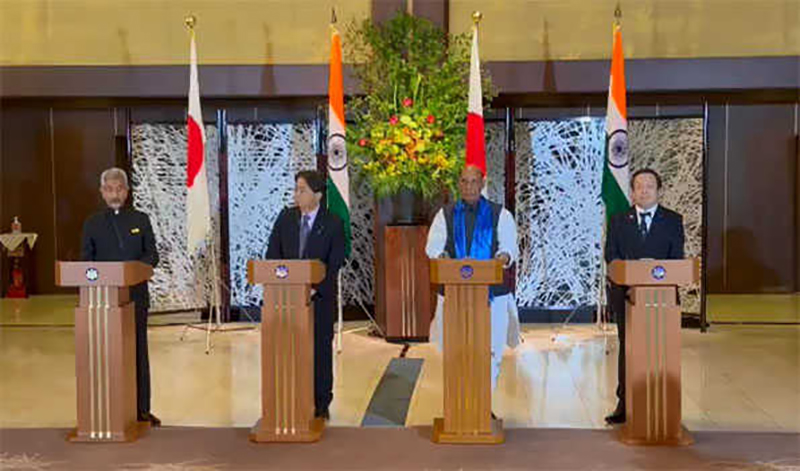 Tokyo/UNI: Amid China's growing assertiveness, India and Japan Thursday agreed to increase the scope and complexities of their joint military exercises.

During the second India Japan 2+2 Ministerial Dialogue, the Defence Ministers of both nations noted that the air services of their countries are working closely for the early conduct of the inaugural India-Japan fighter exercise.

Post dialogue, Indian Defence Minister Rajnath Singh said,"During today’s discussions, we noted the progress in the military to military cooperation and exchanges between the two sides. We shared a common desire to further increase the scope and complexities of our bilateral exercises."

"There is consensus on both sides that a strong India-Japan relationship is very important for a free, open, rule-based and inclusive Indo-Pacific based upon sovereignty and territorial integrity of nations," the Minister added.

Rajnath Singh said that enhancing the Defence Equipment and Technological Cooperation between India and Japan is one of the key priority areas.

"In our meeting today, I had the opportunity to propose engagements in emerging and critical technological domains. I have also invited the Japanese defence companies to look at opportunities in investing in the Indian Defence Corridors," he said.

"We had the opportunity today to share our views on important issues, regional and global, and concurred on the need for peaceful resolution of disputes in consonance with international law," he added.

Singh said that the participation of Japan for the first time in the multilateral exercise MILAN and operationalization of the Reciprocal Provision of Supply and Services Agreement in March this year are milestones in the progress of defence cooperation between the Forces.

We are happy to note that our Air Forces are working closely for early conduct of the inaugural Air Force fighter exercise, he said.

Further, the joint statement after the 2+2 Ministerial Dialogue read that the two Ministers noted the progress in the defence cooperation and exchanges between the two sides and welcomed the participation of Japan for the first time in the multilateral exercise MILAN and the operationalization of the Agreement Concerning Reciprocal Provision of Supplies and Services.

This agreement is between the Self-Defense Forces of Japan and the Indian Armed Forces in the exercise.

The Ministers expressed their commitment to continuing bilateral and multilateral exercises, including Dharma Guardian, JIMEX and Malabar, the Joint Statement further read.