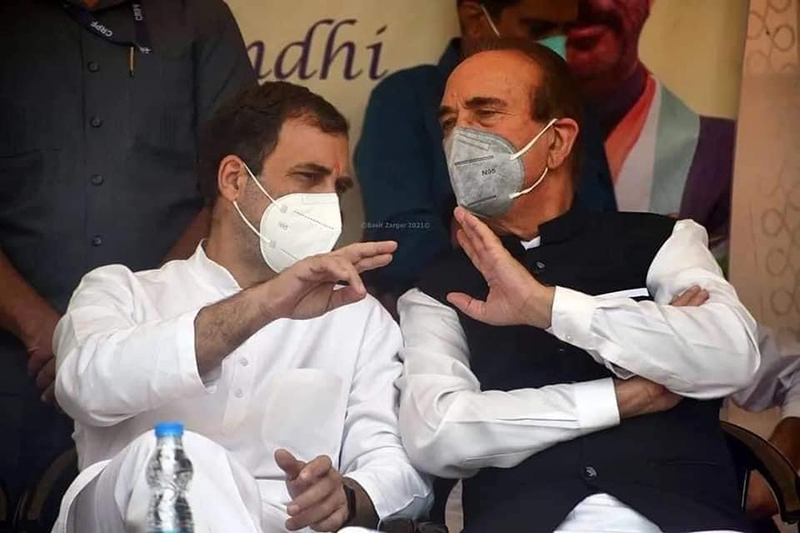 New Delhi/IBNS: In what would further demoralise the grand old party which is yet to recover from the 2014 Modi wave, rebel Congress veteran Ghulam Nabi Azad Friday stepped down from all posts, firing salvo at the top brass.

In a long letter to party's interim president Sonia Gandhi, Azad, a long critic of the top brass, called out Rahul's political immaturity saying, "Unfortunately, after the entry of Rahul Gandhi into politics and particularly after January 2013, when he was appointed Vice President by you, the entire consultative mechanism which existed earlier was demolished by him."

"One of the most glaring examples of his immaturity was the tearing up of the government ordinance in the full glare of the media by Rahul Gandhi," he added.

Azad continued, "This childish behaviour completely subverted the authority of the Prime Minister and the government of India.

"This one single action more than anything else contributed significantly to the defeat of the UPA government in 2014 that was at the receiving end of a campaign of calumny and insinuation from a combination of forces of the right wing and certain unscrupulous corporate interests."

Azad has slammed the top brass comprising Sonia and Rahul for the subsequent poll debacles since 2013, be it in Lok Sabha or assembly elections.

"Under your stewardship since 2014 and subsequently that of Rahul Gandhi, the Congress has lost two Lok Sabha elections in a humiliating manner. It has lost 39 out of the 49 assembly elections held between 2014 - 2022," Azad said.

Azad, a former Jammu and Kashmir Chief Minister, has also raised questions on the way Rahul stepped down from the Congress chief's post after the Lok Sabha debacle in 2019.

The veteran leader, who shares a warm relationship with Prime Minister Narendra Modi, has accused the top brass of running a "remote-control" mechanism in the party just like, as he said, was in full swing in the Manmohan Singh government from 2004 to 2014.

"Worse still the 'remote control model' that demolished the institutional integrity of the UPA government now got applied to the Indian National Congress.

"While you are just a nominal figurehead all the important decisions were being taken by Shri Rahul Gandhi or rather worse his security guards and PAs(personal assistants)," Azad says in an all out attack.