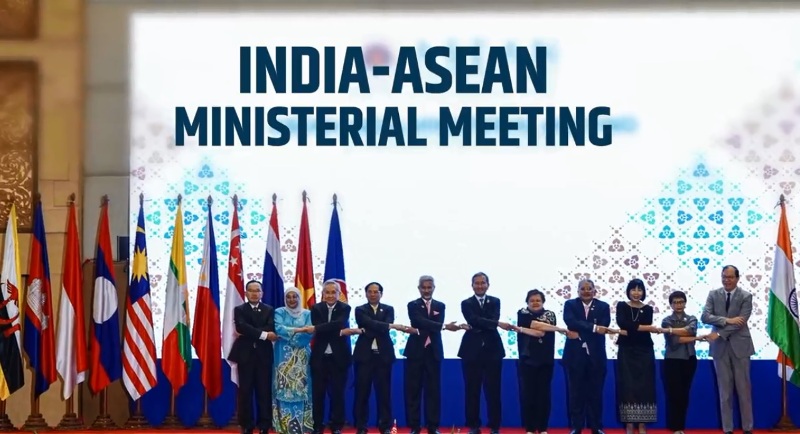 New Delhi/UNI: Against the backdrop of China-Taiwan tensions, India pushed for the centrality of ASEAN in a free, open, inclusive and rules-based Indo-Pacific.

During a meeting of the India-ASEAN Ministeries attended by External Affairs Minister S. Jaishankar in Cambodia, issues related to Indo Pacific region were discussed.

Speaking at the meeting on the theme 'ASEAN ACT: Addressing Challenges Together', Jaishankar highlighted the importance India places on ASEAN as an important pillar of regional, multilateral and global order.

Importantly, some ASEAN countries including India are also troubled by growing Chinese aggression over territorial claims.

"Noting the strong convergence between ASEAN Outlook on Indo-Pacific and Indo-Pacific Oceans Initiative (IPOI), he called for greater cooperation between India and ASAEN in the Indo-Pacific. The ASEAN Foreign Ministers appreciated India’s consistent support to ASEAN and looked forward to working together to further strengthen ASEAN-India relations,"  The MEA said in a statement.

The ministers also deliberated on ways to elevate cooperation in the post pandemic era including enhancing cooperation in areas of smart agriculture, healthcare, new and renewable energy, digital inclusivity and fintech.

They also shared views on important regional and international issues of mutual interest and discussed preparations for the upcoming ASEAN-India Summit.

He also held bilateral interactions with his counterparts from Australia, Sri Lanka, US and Vietnam.

External Affairs Minister’s visit to Cambodia was fruitful and strengthened India’s bilateral and multilateral relations in the Indo-Pacific.