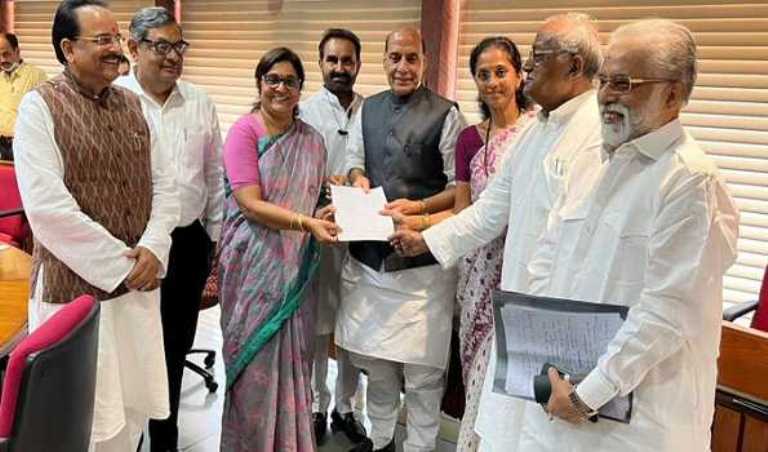 New Delhi/UNI: The assassination of former Japanese PM Shinzo Abe by a man who had served in their force for a brief period was flashed as a warning by Opposition MPs on Monday as they opposed the new recruitment scheme at a meeting of the Consultative Committee on Defence chaired by Defence Minister Rajnath Singh.

Since the announcement, the scheme met with widespread protests and opposition.

According to sources, the Minister was cornered by Opposition MPs who raised several questions about the scheme.

MPs questioned if the scheme would have an impact on national security, as thousands of recruits will leave the force after four years with sensitive information.

The recent assassination of Abe was also mentioned, and MPs said the man who committed the gruesome act had served and worked for three years in Japan's Maritime Self-Defence Forces, also known as the Japanese Navy.

Abe was shot in the neck and chest while campaigning in western Japan on Friday. The shooter, identified as 41-year-old Tetsuya Yamagami.

In a written statement submitted to the committee, Gohil said hurried decisions should not be made in democracy and that government should bring the scheme forward for parliamentary scrutiny and first implement it on a pilot basis.

Gohil also quoted former Chief of Defence Staff, Late General Bipin Rawat and said he had suggested that the retirement age of soldiers should be increased.

He also said the Ukraine war showed that the performance of properly trained soldiers is better than those who came for short-term service.

Twelve MPs were present in the meeting on Monday, including four BJP MPs. The committee has 20 members.