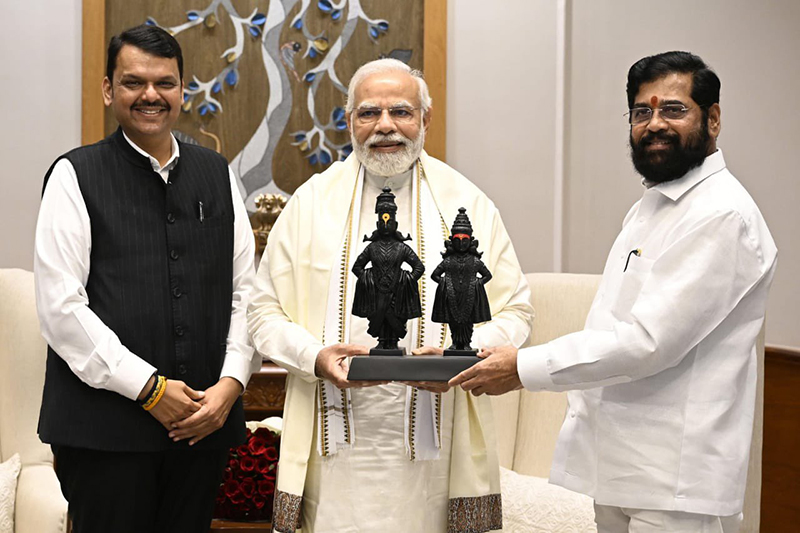 Tweeting images of him meeting PM Modi, Shinde wrote: "Today,together with my colleague DyCM @Dev_Fadnavis met Prime Minister of India Hon.Shri@narendramodi जी to seek his Blessings for Maharashtra's Progress and Thanked him for his Untiring Support."

Earlier speaking to the media, he said several Sena legislators were upset with the Maha Vikas Aghadi alliance and had unsuccessfully tried several times to convince Thackeray about it before launching the rebellion.

Shinde is on a two-day visit to Delhi along with his Deputy Devendra Fadnavis to discuss cabinet expansion with the central BJP leadership.

Speaking to the media here, he reiterated that the MLAs in support of him are the real Shiv Sena. "We have the numbers and have been recognised by the assembly speaker," he said.

On the dispute over who gets to use the party symbol, he said they have faith in the judiciary. "We are Shiv Sena and haven't done anything illegal. We have been recognised as the Legislative party," he added.

Shinde also refuted charges that his ally BJP can go to any extent to be in power.

"I have 50 MLAs, BJP has 115. People anticipated that the Chief Minister will be from the BJP. Can people now say the same thing about the BJP? They can't. A small worker like me got a chance to be the Chief Minister," he added.

He alleged that Uddhav Thackeray neglected Bal Thackeray's Hindutva while the BJP supported it.

Speaking to the media, Devendra Fadnavis expressed support and commitment to making the new government successful.

"It has nothing to do with having a big heart. I follow all the instructions of our leaders. I am with Mr Shinde. We will work under him very well," he said.

"Shiv Sena is of Balasaheb Thackeray and we are in alliance with Balasaheb's Shiv Sena," he added.

Eknath Shinde took oath as the Chief Minister of Maharashtra on June 30 a day after Uddhav Thackeray resigned following a revolt in his party.