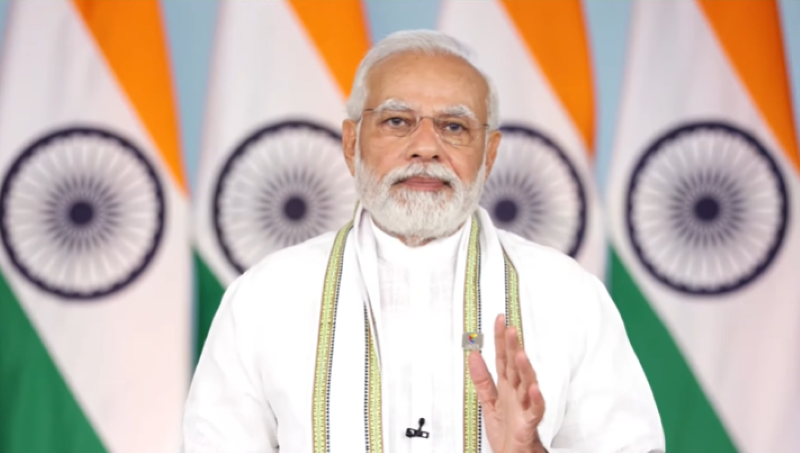 New Delhi/UNI: Prime Minister Narendra Modi Wednesday said India was expecting 7.5% growth this year, which will make it the fastest growing major economy, and added that transformative changes are taking place in every sector in the emerging 'New India'.

Addressing the Opening Ceremony of the BRICS Business Forum 2022 in virtual mode, Modi also said that the BRICS grouping of Brazil, Russia, India, China and South Africa, was established with the belief that this group of emerging economies can evolve as an engine of global growth.

"Today when the whole world is focusing on post-COVID recovery, then the role of BRICS countries will continue to remain very important again."

The PM said that in order to deal with the economic problems arising out of the pandemic, India adopted the mantra of "reform, perform and transform" and the results of this approach are evident from the performance of the Indian economy.

"This year, we are expecting 7.5 percent growth, which makes us the fastest growing major economy. Transformative changes are taking place in every sector in the emerging 'New India'."

He focused on four aspects of the Indian economic growth story — technology-led growth, ease of doing business, the national infrastructure pipeline and unprecedented digital transformation in the country.

He said, firstly, a key pillar of India's current economic recovery is technology-led growth. “We are supporting innovation in every sector.”

"Today, India has one of the best eco-systems in the world for innovation, which is reflected in the growing number of Indian start-ups," he said, adding that there are more than 100 unicorns in over 70,000 start-ups in India, and their number is continuously growing.

"Second, even during the pandemic, India continued to make many efforts to improve the ease of doing business. Thousands of rules have been changed to reduce the compliance burden on the business," he said.

The PM said that work is going on at a massive scale to bring in more transparency and consistency in Government policies and procedures.

Thirdly, he said that Infrastructure is being improved on a large scale, and its expansion is also taking place.

"For the same, India has prepared a National Master Plan. There are investment opportunities of $1.5 trillion under our National Infrastructure Pipeline," he added.

"Fourth, this kind of digital transformation is taking place in India today, it has never been seen on the world stage. The value of the Indian digital economy will reach 1 trillion dollars by 2025," the PM added.

He said the growth of the digital sector has also encouraged the participation of women in the workforce.

"There are approximately 36 % women out of the 4.4 million professionals working in our IT sector.

"The maximum benefit from Technology-based financial inclusion has also gone to the women in our rural areas."

He suggested that the BRICS Women Business Alliance could undertake a study in this transformative change taking place in India.

He said the BRICS countries can also hold a useful dialogue on innovation-led economic recovery.

He also suggested that the BRICS Business Forum could develop a platform for regular exchanges between their startups.