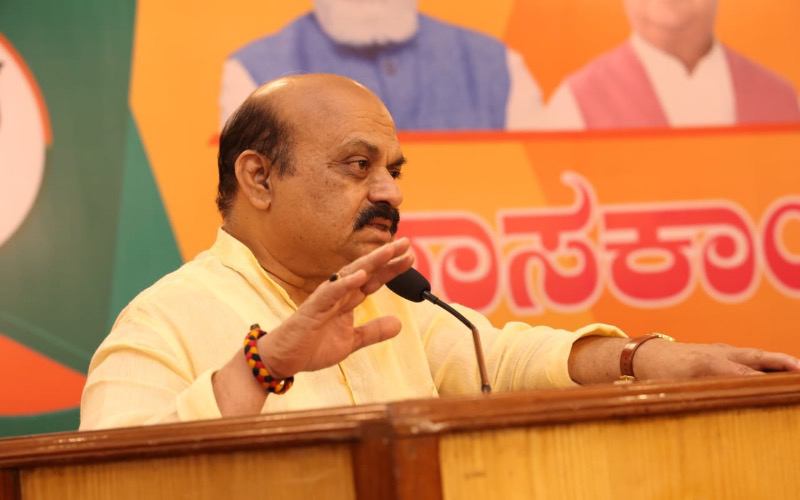 Hubballi/UNI: Karnataka Chief Minister Basavaraj Bommai on Saturday said the police inspectors of all police stations have been instructed to interact with community leaders of their respective areas to maintain peace and harmony in the backdrop of protests and violence against the alleged derogatory remarks on Prophet Mohammad made by Nupur Sharma.

"A high-level meeting has been held with top police brass to take precautionary measures in the backdrop of Delhi and UP violence over derogatory remarks on Prophet Mohammad.

"The police have been instructed to deploy the forces in sensitive areas. The deployment of KSRP contingents is already on. I have spoken to the Police Commissioner of Hubballi-Dharwad and the SP of Dharwad to take appropriate measures," Bommai said at Hubballi airport.

At present the situation is peaceful in the state, Bommai said.

On ensuing MLC elections, Bommai said the BJP is confident of winning all the four seats considering the overwhelming response all over the state.

"I am on a campaign trail in Belagavi and Hubballi. Going by the campaign and the public response so far I am confident of BJP winning all the 4 seats," he said.

On acid attacks, Bommai said legal experts would be asked to formulate more stringent laws to deal with those who indulge in such attacks.

Meanwhile, investigation is on into the deaths caused due to consumption of contaminated water in Raichur. Criminal cases would be registered if necessary, Bommai said.

"Already two officials had been suspended. After samples from all the wards were being tested and investigation is on. Criminal cases would be registered if necessary," he further said.