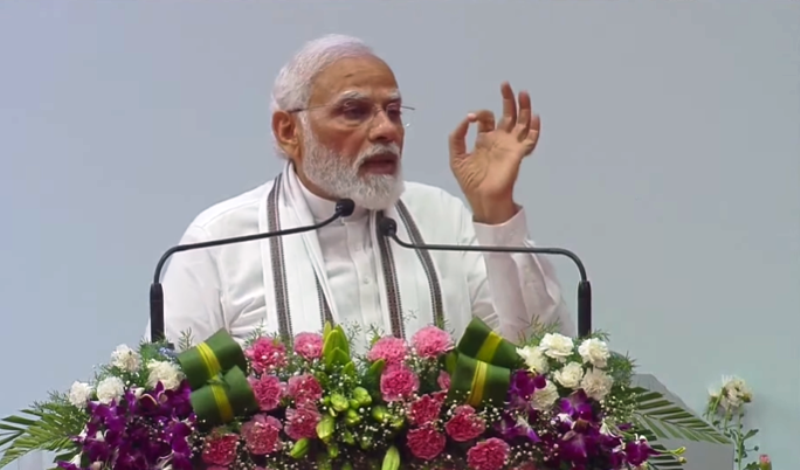 Chennai/UNI/IBNS: Prime Minister  Narendra Modi laid the foundation stone for 11 projects worth over Rs. 31,400 crore in Chennai, with a claim to boost infrastructure development, enhance connectivity and give an impetus to ease of living in the region.

The natural gas pipeline project and the Chennai-Bengaluru Expressway would connect Tamil Nadu and Karnataka passing through Andhra Pradesh.

Launching the projects, PM Modi said these cover key infra sectors such as railways, petroleum, housing and roads. Commerce and connectivity would be boosted by these works.

It is always special to be in Tamil Nadu. Speaking at launch of development initiatives in Chennai. https://t.co/YFQoEiySIj

Though the Chief Minister has called on the Prime Minister in New Delhi on a couple of occasions, this is Modi's first official visit to Chennai after Stalin assumed office as Chief Minister riding on DMK's impressive performance in the 2021 Assembly polls in May.

The 75 km long Madurai-Teni (Railway Gauge Conversion Project), built at a project cost of over Rs. 500 crore, will facilitate access and give a boost to tourism in the region, the Centre said.

The 30 km long third railway line between Tambaram - Chengalpattu, built at a project cost of over Rs. 590 crore, will facilitate the running of more suburban services, thus offering greater options and enhancing comfort for the travellers.

Prime Minister also laid the foundation stone for a Multi-Modal Logistic Park in Chennai worth over Rs. 1400 crore.