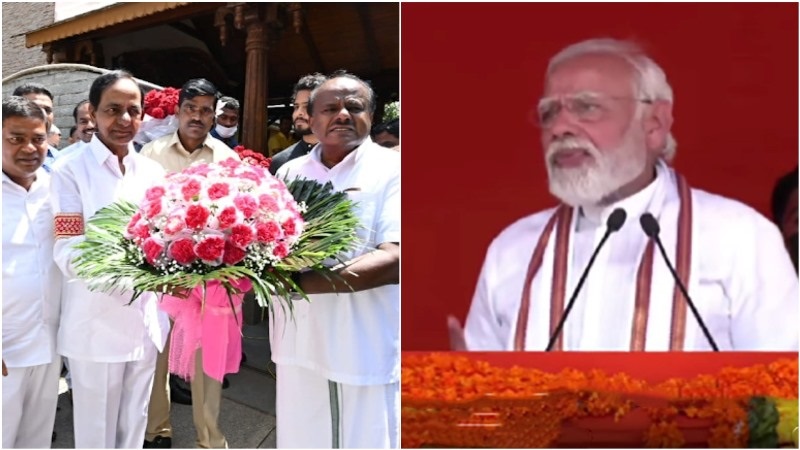 Bengaluru: Telangana Chief Minister K Chandrashekhar Rao has hit back at Prime Minister Narendra Modi, who slammed dynastic politics and called it the biggest enemy of democracy while addressing BJP workers in Hyderabad.

In a counter-attack, KCR said soon there would change at the national level and people would receive a "sensational news".

"There's a lot of 'bhaashanbaazi' (speeches), many promises are made but what is the reality? Industries are closing down, GDP is falling, inflation is increasing... Farmers, Dalits and tribals are unhappy," he said, reported NDTV.

Standing on KCR's home turf, Modi had questioned whether family-based political parties intended to work for the welfare of the people.

"'Parivarvadi' parties only think about their own development. These parties do not care about poor people, their politics is focused on how a single-family can stay in power and loot as much as they can," the Prime Minister said without naming KCR.

Modi's statement comes at a time when the BJP is intensifying its campaign against the ruling Telangana Rashtra Samithi led by KCR with his family members in key posts of the party.

While Modi was thundering in Telangana's capital Hyderabad, KCR was in Bengaluru to meet former  Prime Minister HD Deve Gowda and his son HD Kumaraswamy as part of its effort to build a united front against BJP with a laser focus on the 2024 Lok Sabha elections.

"I would like to say that I met Deve Gowda and HD Kumaraswamy, we discussed everything. There will be a change at the national level and no one can stop it. India will change...India must change. We should make every effort to change the state of the country," KCR said, according to the report.

"You will get sensational news after two-three months," he added, not elaborating.

Modi also taunted KCR's strong beliefs in beliefs and rituals. "The people of Telangana must be wary of those whose superstitious beliefs come in the way of their administration," he said.

In his attempt to bring the opposition together in the general elections, so far he has met Aam Aadmi Party (AAP) chief and Delhi Chief Minister Arvind Kejriwal, Maharashtra Chief Minister Uddhav Thackeray and Kerala Chief Minister Pinarayi Vijayan.

Next, he is going to meet Chief Minister Mamata Banerjee in West Bengal and also travel to Bihar where he intends to meet both Chief Minister Nitish Kumar and opposition leader Tejashwi Yadav.