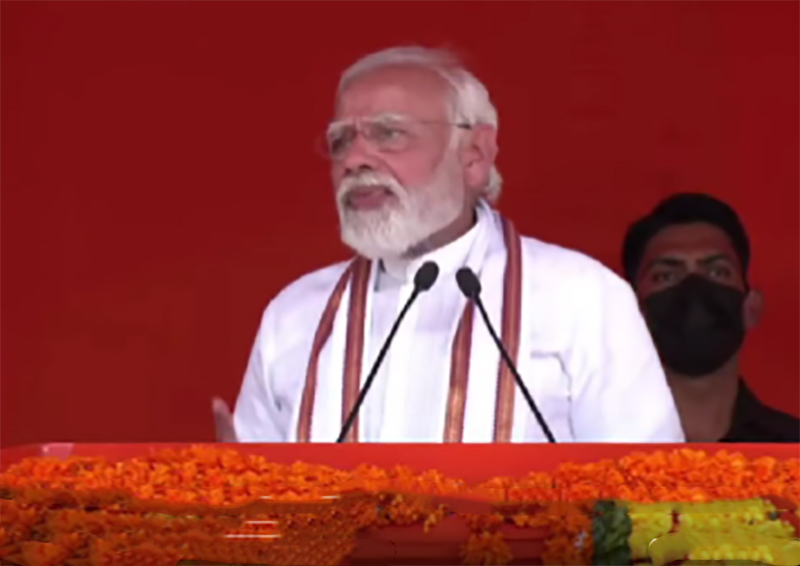 Hyderabad: Prime Minister Narendra Modi Thursday said dynasty-based parties were a threat to democracy as their interest centered around building personal clout and wealth with little interest in the development of the poor.

"Parivarvadi' parties only think about their own development. These parties do not care about poor people, their politics is focused on how a single-family can stay in power and loot as much as they can," the Prime Minister said, addressing BJP workers at Begumpet Airport here.

Modi's statement comes at a time when BJP is intensifying its campaign against the ruling Telangana Rashtra Samithi led by Chief Minister Kalvakuntla Chandrashekar Rao also popularly known as KCR.

Telangana assembly elections are slated to be held a year later.

"They do not have any interest in the development of people,” he said, adding that the BJP wanted to develop Telangana as a “technology hub”.

"Our aspiration is to take Telangana to a higher level,” thundered Modi.

"Family rulers do not care about the poor. The people of Telangana are seeing how corrupt it can be if a single-family was in power.”

He added: "The Telangana movement was full of sacrifices. These sacrifices were not made so that one family continues to crush the dreams of Telangana. Parivarwaadis are not only India's political problem, but dynastic politics and such parties are also the biggest enemies of the democracy and youth of the country."

"When parties dedicated to one family come to power, they become the biggest source of corruption. Their only concern is to ensure that one family somehow continues to occupy power and loot as much as they can."

The Bharatiya Janata Party (BJP) will storm to power after assembly elections next year, Modi said.

He said development begins when dynastic politics end and underlined that the BJP wanted “development” in the southern state.

The Prime Minister expressed confidence that the BJP will come to power in Telangana.

Modi has often slammed dynastic politics. He has in the past targeted the Congress, Samajwadi Party, and RJD.

This is the second time in recent months that KCR missed a meeting with the Prime Minister in the state.