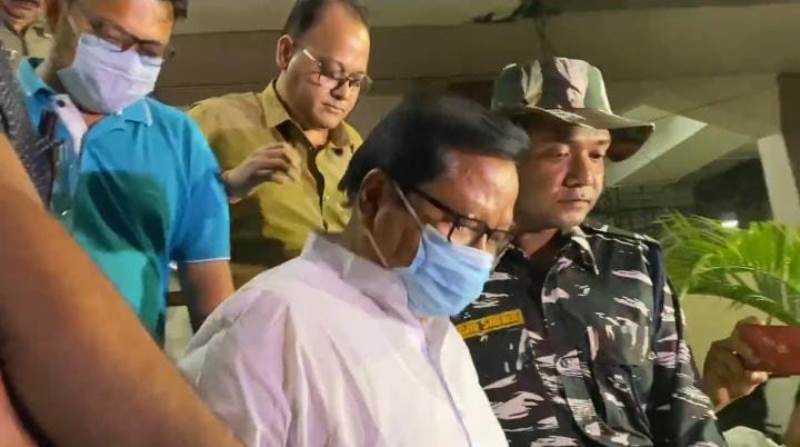 Kolkata/UNI: The CBI Saturday summoned West Bengal junior Education Minister Paresh Chandra Adhikari for the third time consecutively in relation to the alleged irregularity in the appointment of his daughter in a government-aided school.

On Friday, Adhikari was grilled by the CBI for around nine and half hours and on Thursday for around three hours.

Adhikari was asked by the CBI when he joined the Trinamool Congress from Forward Bloc and whom he contacted in the ruling party during joining.

He was also questioned how his daughter got the job and who else used influence to get her the job, sources added.

The accused minister appeared at Nizam Palace around 10.40 am this morning for further interrogation.

Meanwhile, the Calcutta High Court in a new directive ordered Adhikari's daughter Ankita be dismissed from the job.

Adhikari, who first skipped the HC order to appear before the CBI by 8 pm on Tuesday and went incommunicado for over 36 hours, appeared before the CBI at 7.30 pm Thursday after the central agency filed an FIR against him following a court order.

Court sources said Justice Abhijit Gangopadhyay is hearing a fresh petition filed by one Babita Sarkar, who alleged that the minister's daughter -Ankita Adhikari - got the teaching job in a government-aided school in north Bengal despite having a scored less marks than her in the recruitment examination.

The judge in a fresh order Friday barred Ankita Adhikari from entering the school and ordered her to return her salary for 43 months in two installments.

The judge said the salary to be returned will be deposited in the Register General's office in the high court.

The minister, along with his daughter, was “booked under sections 420 (cheating and dishonesty) and 120B (criminal conspiracy) of the Indian Penal Code (IPC) besides sections under Prevention of Corruption Act”, said another CBI officer.

The central agency, following orders of the high court, has been investigating a number of cases where teaching and non-teaching staff were allegedly appointed illegally in schools following recommendations by the state's School Service Commission (SSC).

The CBI also quizzed former education minister Partha Chatterjee on Wednesday for nearly three and half hours for alleged irregularities in the recruitment of teachers and non-teaching staff in state-run and government-aided schools.

Chatterjee is now IT and commerce minister and reportedly moved the Supreme Court against the Calcutta high court order.

The CBI has summoned Chatterjee once again next week.