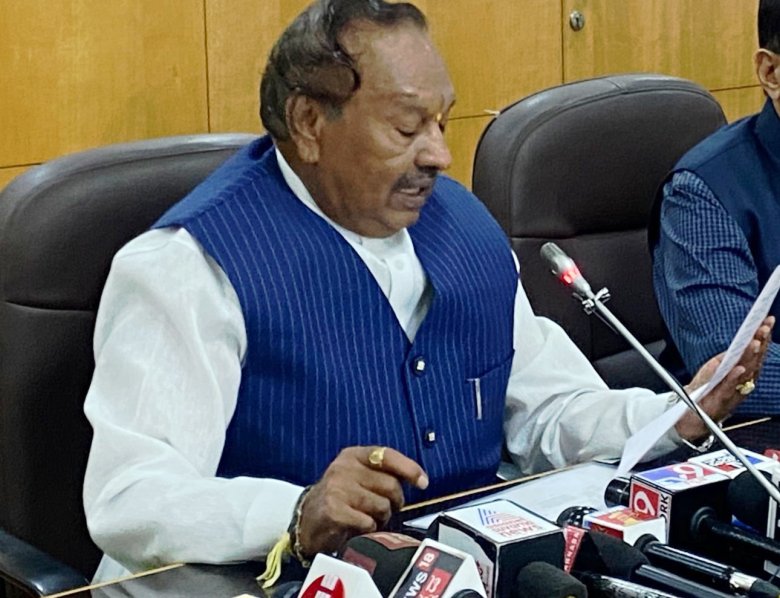 'Will be back': KS Eshwarappa, named in suicide case, resigns

Bengaluru/IBNS: Bharatiya Janata Party (BJP) leader and Karnataka Minister KS Eshwarappa, who found himself in the middle of a huge controversy following allegations of corruption and an alleged role in the suicide of a contractor, resigned on Friday with a promise the he "will be back".

In a massive show of strength before his resignation, a huge convoy of cars accompanied him to the capital Bengaluru where he tendered his resignation.

In his constituency Shivamogga, supporters even protested against his "forced resignation".

"I don't want to cause any trouble for my seniors and well-wishers in the party. So, I am meeting the Chief Minister in the evening to submit my resignation. I am also confident that I will come out clean," he told reporters ahead of resigning.

On being asked about Congress MLA Priyank Kharge's charge of other people too involved in the '40% cut money scandal', Eshwarappa said, "Why doesn't he (Mr Kharge) name even one of the people behind this scandal?"

Eshwarappa had earlier said, "There is a conspiracy to malign my name. A death note allegedly has been found, it is said. But there is no signature on it and it was not found with the body."

"Can a Whatsapp message be treated as a death note. It can be typed by anybody," he had said referring to the purported message by Patil.

Eshwarappa had said he did not know who Patil was. It is learnt that Patil was the National Secretary of the Hindu Yuva Vahini.

He was found dead in a lodge in Udupi on Tuesday with police suspecting it to be a case of suicide.

In a purported message on social media, Patil allegedly held the Minister responsible for his death.