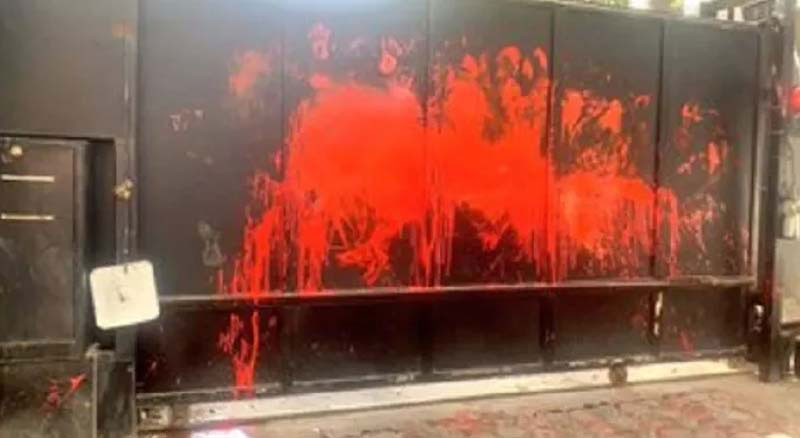 New Delhi: The Delhi Police on Wednesday detained around 70 people in connection with an attempt to lay siege on Delhi Chief Minister Arvind Kejriwal's residence and vandalising CCTV cameras and breaking a boom barrier arm.

A senior police official said legal action has been initiated after unruly events were witnessed outside the CM residence led by BJP leaders from the party's youth wing.

A sit-in was started by around 150-200 protestors of BJP Yuva Morcha outside the CM residence on Link Road near IP College against remarks made by Kejriwal in the Delhi Vidhan Sabha over "The Kashmir Files" movie, the Delhi Police official said.

At around 1 pm, some of the protestors breached two barricades and reached outside CM's house where they created ruckus and shouted slogans.

They were carrying a small box of paint from which they threw paint outside the door. In the imbroglio, a boom barrier arm was also found vandalised as also a CCTV camera, Delhi Police said.

Kejriwal had slammed the BJP leaders for promoting the movie and asked not to put up posters of a “false movie” claiming that filmmakers were earning money by using the suffering of Kashmiri Pandits.

The Bharatiya Janata Yuva Morcha members were the ones, who allegedly vandalised property outside the CM house, Deputy Chief Minister Manish Sisidia along with several other Delhi Ministers and MLAs alleged on Twitter as well.

They called it a "conspiracy to kill Kejriwal" as BJP was stunned by its only defeat in the five Assembly polls, where they lost Punjab to AAP.

“BJP goons kept vandalizing the house of CM Kejriwal. Instead of stopping them, the BJP police brought them to the door of the house,” he said in another tweet.

Calling it a “premeditated” move, Sisodia alleged that since the BJP has failed to defeat Arvind Kejriwal, they were “trying to kill him.”

BJYM national president Tejasvi Surya and Delhi BJP spokesperson Tajinder Pal Singh Bagga led the protest that was called against Kejriwal's statement on the movie 'The Kashmir Files' in the Delhi Assembly, which also created an uproar throughout the country with severe attack directed on social media at Kejriwal.