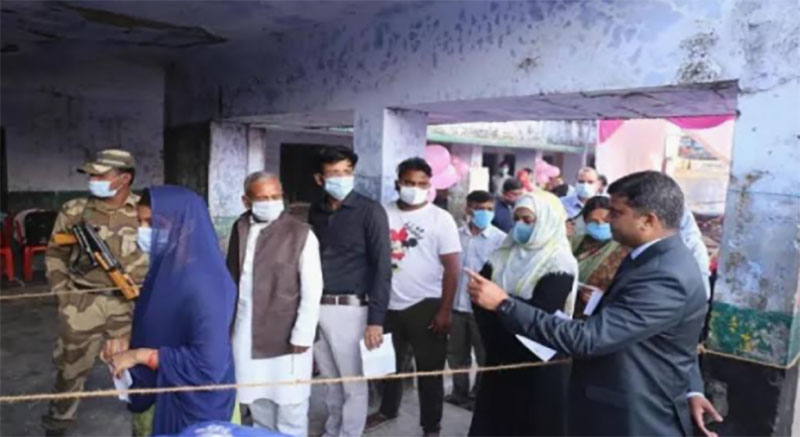 Lucknow/UNI/IBNS: The seventh and final phase of the Uttar Pradesh assembly elections are underway on Monday with the voting in the country's most populous state closing in following a stiff fight between the incumbent Bharatiya Janata Party (BJP) and its prime adversary Samajwadi Party (SP).

Polling began at a slow pace as only 8.58% out of 2.06 crore were polled till 9 am for 54 seats spread over 9 districts in the final and seventh round of Uttar Pradesh Assembly elections on Monday.

According to the Joint Chief Electoral Officer, maximum 9.99% votes were polled in Mau district, whereas Bhadohi saw 7.43 per cent turnout.

Shortly after the polling started, Samajwadi Party complained regarding EVM malfunction at a polling booth in Nizamabad assembly constituency in Azamgarh district.

The party requested the Election Commission to replace the EVM. According to the Additional Electoral Officer around 35 complaints were received during initial stages which have been rectified.

It may be noted that polling for 54 seats being held under tight security arrangements and maximum 28 assembly constituencies have been marked as sensitive in this phase.

While on 51 seats polling will continue till 6 pm, on three including Chakia in Chandauli, Robertsganj in Sonbhadra and Dudhi it will be held till 4 pm as these seats have been marked as sensitive by the Election Commission.