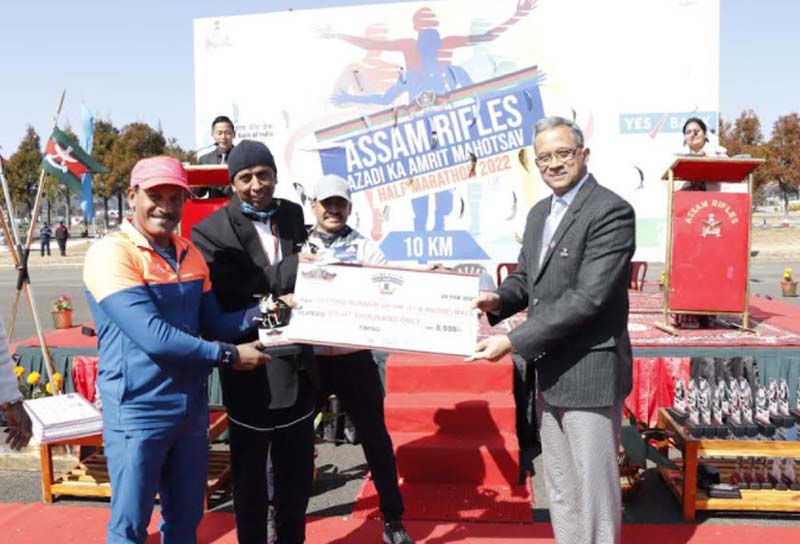 Shillong:  The Assam Rifles organized the inaugural Half Marathon as part of “Azadi ka Amrit Mahotsav” celebrations on Sunday (February 20) at the Headquarters of Directorate General Assam Rifles, Laitkor Garrison, Shillong in Meghalaya.

The Half Marathon was flagged off by Lt Gen KC Panchanathan, GOC 101 Area and saw an enthusiastic participation of more than 678 serving personnel and families of Assam Rifles, 101 Area, 58 GTC, ARC, Eastern Air Command and CRPF.

The run was divided in three categories of 21 km, 10 km and 2.5 km each having its own age groups.

The other winners of the 21 km category as per age group included Rifleman Bharat Bhushan, Rifleman Devender and Sub /SKT Bishan Singh winning the first, second and second prizes in the 41 to 50 age category.

The fervour and spirit of the marathon was boosted further with the participation of ladies and children in all categories.  Children barely 5 years old participated and successfully completed the 2.5 km category showing their enthusiasm and resolve.

It has carried out numerous activities promoting 'Azadi ka Amrit Mahotsav' and 'Fit India Movement' in the past. This not only brings cohesiveness in the region but also plays a pivotal role towards Nation Building and Unity, thereby making it a 'Force that Binds the North East'.