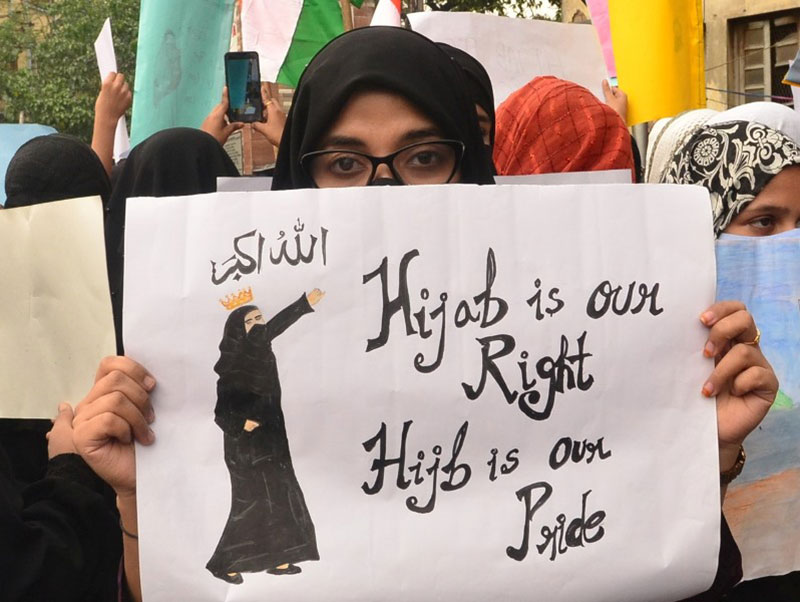 The complaint has been lodged with Tumakuru city police against 15 to 20 students for violating prohibitory orders in the last two days.

The Principal of Empress College of Tumkuru lodged the complaint against them for staging a protest demanding to allow them attend classes wearing hijab.

He ,however, has not named any student in the complaint.

This action comes in the wake of Karnataka High Court passing an interim order restricting wearing of hijab, saffron shawls or any other religious attire on educational campuses where dress code has been implemented.

The government also has issued a circular restricting religious attire in educational institutions including those run by minority welfare departments. Karnataka Home Minister Araga Jnanendra too had warned strict action against those who flout the Court's interim orders.

In another incident, the police have registered an FIR against Congress leader Mukarram Khan for his controversial "tukde tukde" (cutting into pieces) comment.

Khan has been booked under IPC sections 153 A (promoting enmity between different groups), 298 (uttering words with deliberate intent to wound the religious feelings of any person) and 295 (intention of insulting religion of any person).

The Congress leader, on February 8, had stated that he would cut to pieces anyone who interferes in hijab matters. Hindu organisations have strongly protested against the provocative comments and demanded action.