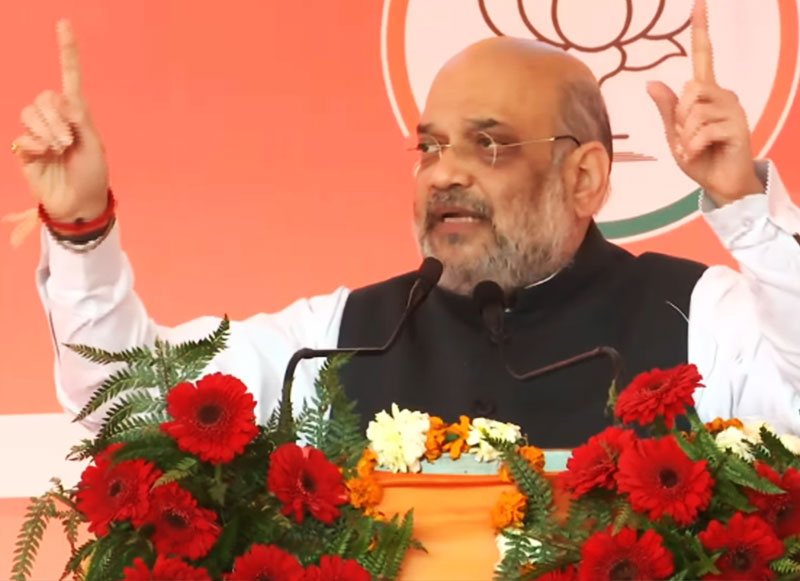 Will give free electricity to farmers: Amit Shah promises UP voters

Firozabad/UNI: Union Home Minister Amit Shah on Thursday, while appealing to the people to give a second chance to Bharatiya Janata Party (BJP) in Uttar Pradesh, announced that free electricity will be given to the farmers.

Addressing an election rally at Shikohabad, Shah said, "Give us another five years and the farmers will not be required to deposit electricity bills. Electricity will be made free for the farmers for the next five years. We will give scooty to every 12th pass girl, laptops and smartphones to youths taking admission in the colleges."

He attacked Samajwadi Party (SP) and said that it is socialist only for its name and its formula is to collect money and give positions of power to family members.

Shah said, "SP is Samajwadi (socialist) only for name. It has only two formulas. S means 'sampatti ikattha karo' (amass wealth) and P means 'parivaar walon ko satta dena' (to give power to the family members). During the SP regime 45 members of the family were in the government.

"There was no place for any other family to leave the caste alone."

He said that they did so much corruption that when a raid was conducted at Samajwadi Itra trader in Kanpur recently, bundles and bundles of notes were recovered from him.

"When the raid was conducted SP chief Akhilesh Yadav had a stomach ache and he questioned why raids were being conducted. I want to ask him if the money recovered was yours?," he said.

Shah said, "While Akhilesh's mantra is to amass wealth and go on vacation in foreign countries, Bharatiya Janata Party's (BJP) mantra is to collect tax and work for the welfare of the poor. You (people) have to select between the two."

He said that while BJP rules for the poor, backwards and Dalit, SP and Bahujan Samaj Party (BSP) rule for specific castes.

"When SP used to come to power it worked for one particular caste and when BSP came it worked for another caste. When BJP came, Modi gave the slogan of 'Sabka Saath, Sabka Vikas'," he said.

Shah said that after polling for the first two phases of Uttar Pradesh polls it is clear that BJP is coming back with a majority.

"Do you want to know the result of the first two phases? SP has been wiped out and BJP will form the government again with more than 300 seats. You made BJP victorious in 2014, 2017 and 2019. Ensure our victory this time and we will turn UP into the number one state of the country," he said.

"Did electricity used to come during the SP government? During the Yogi government 22 hours supply in rural areas and 24 hours in cities have been ensured. From where Akhilesh will give electricity free when you failed to provide it during your regime," he said.