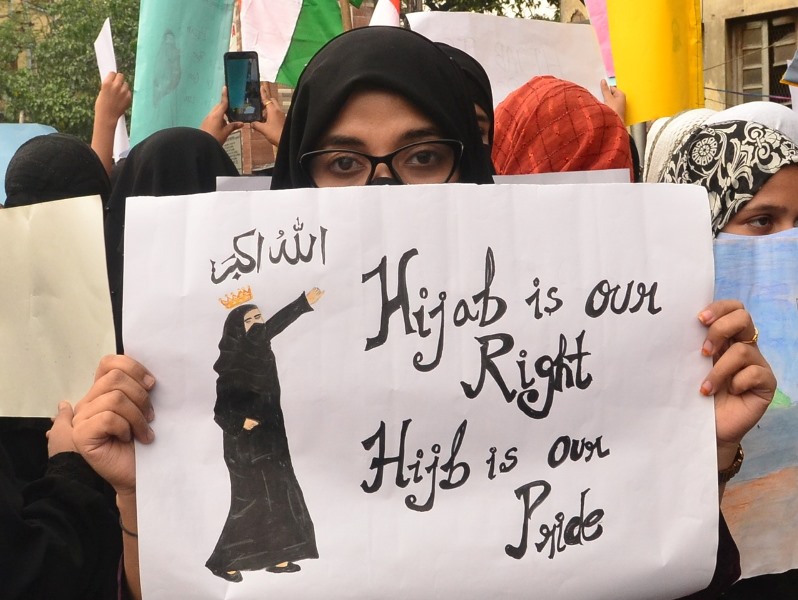 Bengaluru/UNI: As many as 13 female students of Shivamogga Government High School in Bengaluru refused to take SSLC preparatory examination on Tuesday after the teacher urged them to remove their hijab before entering the school, as per an interim order of the Karnataka High Court.

The teacher requested the students to remove hijabs, but the Muslim students refused and demanded that they should be allowed to write their exams wearing hijabs in violation of the court order.

The teacher gave an alternative suggestion to the students by asking them to write the exam in a separate room with their hijabs. But they rejected this option and decided to skip the exam.

The parents of the students who arrived at the school backed their children and brought them home, arguing that they would not attend courses unless they wore hijabs.

"Exams are not important for me, religion is important. We will not attend school if hijab is not made obligatory. My parents have asked me to come back home if asked to take off my hijab," Aliya Mehat said.

The Deputy Director of Public Instruction, who had rushed to the school, said exams will be rearranged for those who boycotted it after deliberation between parents and the School Development Monitoring Committee.

Meanwhile, one of the petitioners in the ongoing hijab row in Karnataka has sought adjournment in the hearing till Feb 28 claiming that the arguments are being used by political parties and groups 'for ulterior gains' in the ongoing elections in six states.

The Islamist group Popular Front of India (PFI) and its students' wing, Campus Front of India (CFI), are allegedly supporting these protests demanding that hijab be allowed on school campuses, despite school uniform rules.

Jamiat Ulama-e-Hind, another Islamic organisation, has also backed the protests.

The High Court has ordered that until their verdict in the case, the educational institutes must not allow any religious attire inside the campus.