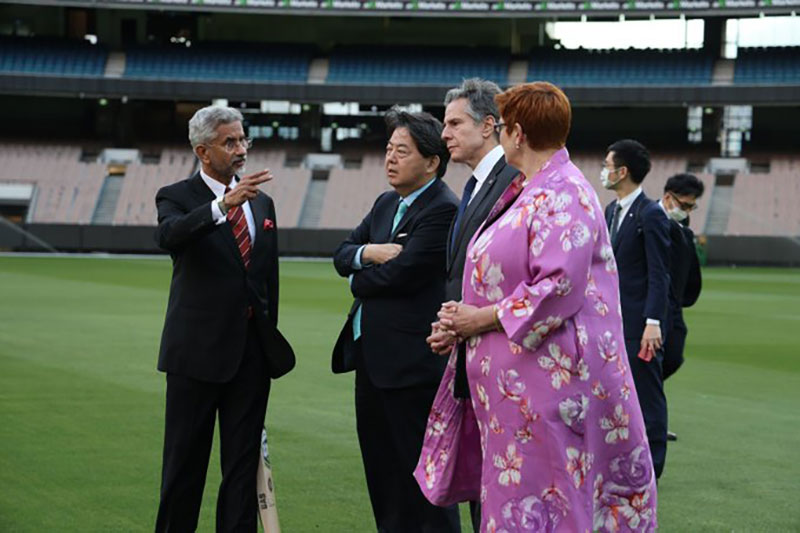 Melbourne/New Delhi/UNI: The Quad countries on Friday reiterated their condemnation of terrorist attacks in India, including the 26/11 Mumbai and Pathankot attacks, and stressed that Afghan territory should not be used for terrorism, and spoke in favour of a free, open and inclusive Indo-Pacific.

The four Foreign Ministers – India's S Jaishankar, Australia's Marise Payne, US Secretary of State Antony Blinken, and Japan's Yoshimasa Hayashi, also reaffirmed the Quad's commitment to supporting Indo Pacific countries' efforts to advance a free and open Indo-Pacific – a region which is inclusive and resilient, and in which states strive to protect the interests of their people, free from coercion.

“Working together as the Quad, we are more effective in delivering practical support to the region,” The joint statement said.

They backed unwavering support of ASEAN unity and centrality, and the ASEAN-led architecture.

They also acknowledge the importance of sub-regional mechanisms and institutions, including in the Mekong sub-region, and said they will continue to support Cambodia in its important role as 2022 ASEAN Chair.

“We are pleased with the Quad Vaccine Partnership's rapid progress in expanding vaccine production at the Biological E Ltd facility in India, which aims to deliver at least 1 billion vaccines by the end of 2022.

"We look forward to the delivery of the first batch of Quad-supported vaccines in the first half of this year,” the statement said, adding that they are assisting to train healthcare workers, combat vaccine hesitancy and augment infrastructure, especially cold chain systems, for 'last mile' vaccine delivery.

“We welcome the timely initiative for coordinating the response to combat the COVID pandemic under a Global Action Plan for Enhanced Engagement," read the statement.

“We commit to further strengthening our collaboration and building links between our response agencies to provide timely and effective HADR support to the region.”

“The Quad recognises that international law, peace, and security in the maritime domain underpins the development and prosperity of the Indo-Pacific. We reiterate the importance of adherence to international law, particularly as reflected in the UN Convention on the Law of the Sea (UNCLOS), to meet challenges to the maritime rules-based order, including in the South and East China Seas” – in a reference to China's growing hegemony in the two seas.

“We are determined to deepen engagement with regional partners, including through capacity-building and technical assistance, to strengthen maritime domain awareness; protect their ability to develop offshore resources, consistent with UNCLOS; ensure freedom of navigation and overflight; combat challenges, such as illegal, unreported, and unregulated fishing; and promote the safety and security of sea lines of communication.”

“In this context, we call on all countries to ensure that territory under their control is not used to launch terror attacks and to expeditiously bring to justice the perpetrators of such attacks. We reiterate our condemnation of terrorist attacks in India, including 26/11 Mumbai and Pathankot attacks. We reaffirm UNSC Resolution 2593 (2021) that Afghan territory should not be used to threaten or attack any country, shelter or train terrorists, or plan or finance terrorist acts, with such ungoverned spaces being a direct threat to the safety and security of the Indo-Pacific.”

“We are committed to promoting international peace and stability in cyberspace, and to helping build the capacity of regional countries to implement the UN Voluntary Framework for Responsible State Behaviour in Cyberspace.”

“We reaffirm our commitment to upholding and strengthening the rules-based multilateral trading system, with the World Trade Organization at its core. We oppose coercive economic policies and practices that run counter to this system and will work collectively to foster global economic resilience against such actions,” it said, in another reference to China.

“We are exploring a track 1.5 dialogue between our respective strategic thinkers.” They also welcomed efforts in delivering Quad Leaders' ambitious initiatives in key areas, such as the Quad Vaccine Partnership, climate change, cyber security, infrastructure, and the peaceful use of outer space, education, and critical and emerging technologies.

On Myanmar, it said they reaffirmed support for ASEAN efforts to seek a solution in Myanmar and call on the military regime to urgently implement ASEAN's Five-Point Consensus and swiftly return Myanmar to the path of democracy. It condemned North Korea's destabilising ballistic missile launches in violation of UN Security Council resolutions (UNSCRs), reaffirmed commitment to the complete denuclearisation of North Korea and reconfirmed the necessity of immediate resolution of the issue of Japanese abductees.

They also looked forward to Japan hosting the next Quad Leaders' Summit in the first half of 2022. Significantly, the joint statement was silent on Ukraine, with India keeping quiet on the concerns of the US and Australia on Russia.