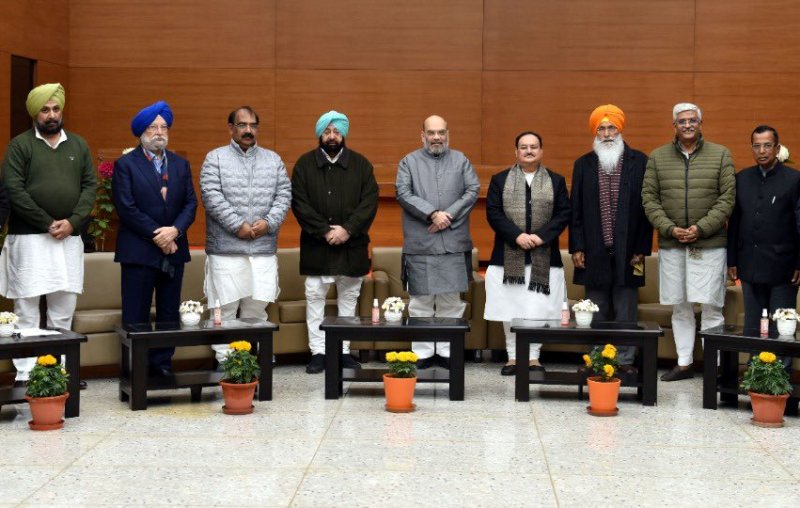 New Delhi/UNI: The distribution of seats among the allies of the National Democratic Alliance (NDA) was finalised on Monday for the Punjab Assembly elections.

Nadda said that this Punjab poll is an election to ensure the safety of the next generation. He said that our aim is to bring Punjab back on the track of development and stability.

Nadda said that Prime Minister Narendra Modi constituted a Special Investigation Team (SIT) to probe the 1984 riots and today the accused are in jail.

Nadda said “Punjab is a state situated on the border of Pakistan. Therefore, keeping in mind the security of the country, it is very important to have a stable and strong government in Punjab. Pakistan has always been trying to spread unrest in our country through Punjab, this thing is not hidden from anyone."

On this occasion, Captain Singh said, "I was the Chief Minister of Punjab for four and a half years in the present government. During this, many illegal rifles, pistols, RDX and ammunition were continued to be found from there. All these were dropped from Pakistan through drones at certain places."

Dhindsa said "The condition of Punjab is very bad. Industries are migrating from Punjab. There was a lot of debt on agriculture too. Punjab has a debt of more than three lakh crores. That's why all the three parties have spoken together. The issue of Hindu-Sikh is raised in Punjab elections. We have gathered to take care of him. Will keep Punjab's atmosphere fine."

It is pertinent to mention here that Shiromani Akali Dal, a long-time ally of BJP in Punjab, chose a different path after differences over agricultural laws.

The BJP is in the fray with new allies for the first time since the SAD broke away from the NDA. Voting will be held in the state on Feb 20.