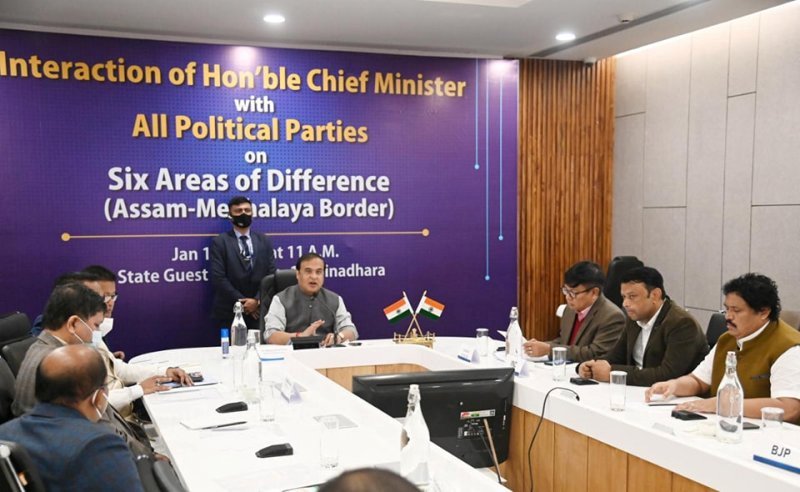 Guwahati/IBNS:  Assam Chief Minister Himanta Biswa Sarma on Tuesday held interactions with the representatives of political parties and students’ organizations to discuss the longstanding inter-state border dispute between Assam and Meghalaya and solicit their views on the steps taken by the governments of both the states to settle differences through consultations in two separate meetings held at State Guest House, Koinadhara in Guwahati.

In the interaction with the political parties, the Assam Chief Minister said that the inter-state border dispute between Assam and Meghalaya is a five-decade-old problem and the state government aims to bring a lasting solution to this issue in an amicable way through consultations.

Sarma informed that three Regional Committees with representatives from both the states headed by one Cabinet Minister and local MLA as members along others were constituted.

Based on the recommendations of the Regional Committees and several rounds of Chief Minister level discussions, a roadmap has been prepared to bring about a full and final settlement to the inter-state border dispute in those six areas of difference.

In the second meeting, Sarma held interaction with AASU (All Assam Students’ Union)  and delegates of Rabha, Gorkha, Garo and Bodo Students’ Union at Koinadhara.

The meeting was held as part of the government’s endeavour to bring about a permanent and lasting solution to the decades-old border dispute between Assam and Meghalaya.

In the meeting, Chief Minister Sarma sought their cooperation following mutually agreed principles to solve the long-pending problem and also apprised them of the harmonious talks that led to taking up six areas namely Ratacherra, Tarabari, Boklapara, Khanapara-Pillingkata, Hahim and Gizang - for finding amicable solutions.