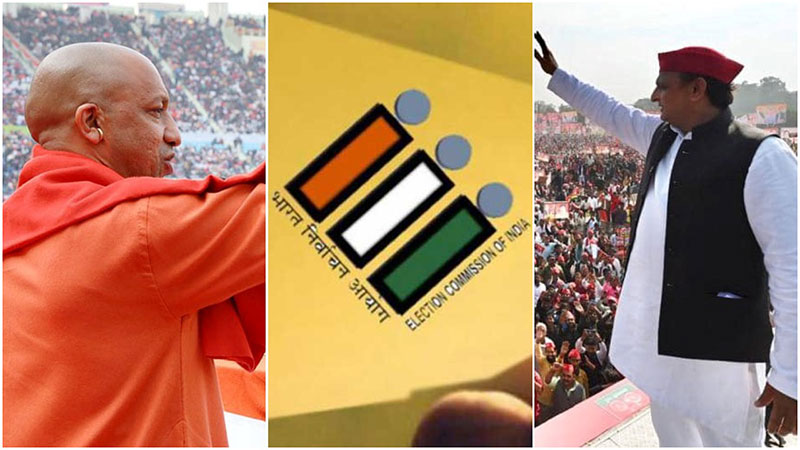 UP polls 2022: ECI to set the ball rolling from tomorrow

Lucknow /UNI: With political parties grappling in selecting candidates for the 403 assembly seats in the state, the Election Commission of India(ECI) is prepared to set the ball rolling for the 7- phase crucial assembly polls in Uttar Pradesh from Friday, it was announced on Thursday.

Termed as a semi-final before 2024 Lok Sabha polls, UP is witnessing large scale defection in all the major political parties, with two cabinet ministers of Yogi Adityanath government resigning and likely to join the Samajwadi Party soon.

Several MLAs from the BJP, SP and Congress too have been joining other political parties.

Political parties are also burning the midnight oil to select candidates and the lists are expected to be out in a day or two.

On the other hand, ECI will issue notification for the first phase of polls in 58 assembly segments covering 11 districts in western UP on Friday at 11 am to kick start the poll process.

State Chief Electoral officer(CEO) Ajay Kumar Shukla here on Thursday said that all preparation for issuance of notification for the first phase has been completed and it will be done on Friday morning.

He said nominations in these 58 assembly seats will commence while strictly following Covid norms and guidelines issued by the ECI.

Surprisingly, this time, the ECI will start the process from Kairana in Muzaffarnagar district, which is the number 8 assembly segment of the state though every time it commenced from Behat seat in Saharanpur district which is number one. Now Behat polls will be held in the second phase.

Already over 120 companies of Central forces have reached UP to maintain law and order during the polls.

ECI has announced a 7 phase poll this time similar to the 2017 polls though the duration has been reduced by 5 days.

In 2017, the poll dates were announced on January 4 and results were declared on Mar 11.

But this time, the polls were announced on January 8 and results would be declared on Mar 10.

The poll process will commence from Jan 14 , with issuance of notification for the first phase starting from western UP on January 14 where polling will be held on Feb 10.