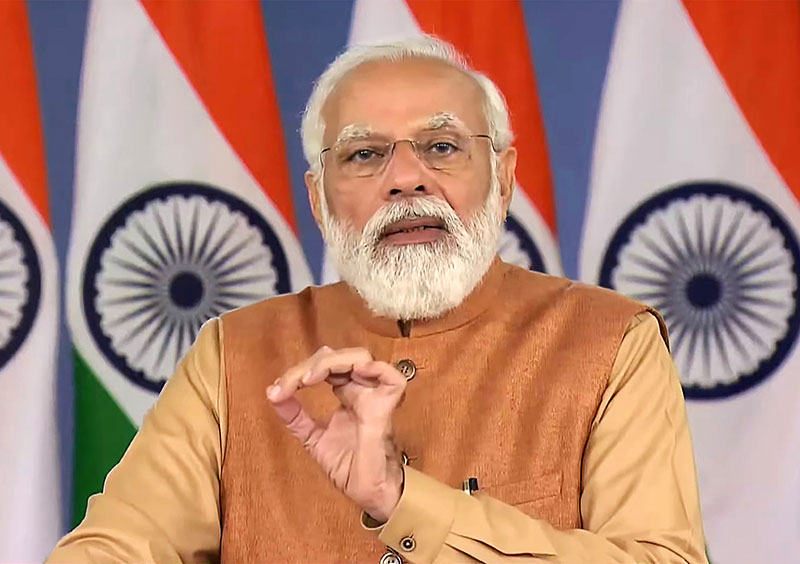 New Delhi/UNI: In a major push to natural farming, Prime Minister Narendra Modi on Thursday urged state governments to make the farming method a mass movement and called for at least one village in each Panchayat adopting it.

Addressing the National Conclave on Natural Farming in Anand, Gujarat via video conferencing, the Prime Minister laid emphasis on reducing dependence on chemical fertilizers and pesticides to reduce the input cost of farmers.

"We have to import huge amounts of chemicals and fertilizers worth thousands of crores. Consequently, input cost goes up, expenses of farmers increase and the kitchen budget of the poor also goes up," Modi said at the event.

The Prime Minister said that those who would be benefitted the most from natural farming are 80 crore farmers, especially those who have less than 2 hectares of land.

"They spend a lot of money on chemical fertilizers. If they adopt natural farming their cost would considerably come down and would lead a better life," he said.

Zero budget natural farming refers to farming without taking any credit or spending money on purchased inputs. Desi cow, its dung and urine play an important role from which various inputs are made on the farm and provide necessary nutrients to soil. Zero budget farming seeks to end farmers' dependence on loans and drastically cut production costs.

The scheme mainly emphasises on exclusion of all synthetic chemical inputs and promotes on-farm biomass recycling with major stress on biomass mulching, use of cow dung-urine formulations and other plant-based preparations.

As per official data, financial assistance of Rs 12,200 per hectare for 3 years is being provided under BPKP for cluster formation, capacity building and hand-holding by trained personnel, certification and residue analysis.

"As of now, under the BPKP programme an area of 4.09 lakh hectare has been covered in 8 states and Rs 4980.99 lakh has been released," Agriculture Minister Narendra Singh Tomar told Rajya Sabha recently.

While noting that chemicals and fertilizers had contributed significantly in the Green revolution, Modi said that there is need to look for alternatives.

"Natural farming will play an important role in the transformation of Indian agriculture in the 21st century," he said.

A myth has been created that crop yield would be affected without chemical fertilizers. While the truth is contrary to this, he said underscoring the need for adopting natural farming.

He also emphasised on re-learning the ancient knowledge and adopting them as per the requirement of modern times.

Modi said that many experts have reaffirmed that indigenous or native cows have a very important role in natural farming. Further, they have said that from cow dung and cow urine one can find solutions to not only protecting crops but also enhancing soil fertility.

Speaking at the event, Home Minister Amit Shah who also holds the portfolio of the Ministry of Cooperation said that in order to promote natural farming it is important that farmers get fair prices for their produce.

He informed the audience that the Ministry of Cooperation is working towards setting up a network of laboratories across the country which would do soil testing and also certify that the soil is chemical free.

The labs would also certify organic produce so that they get access to the global markets and established as brands.