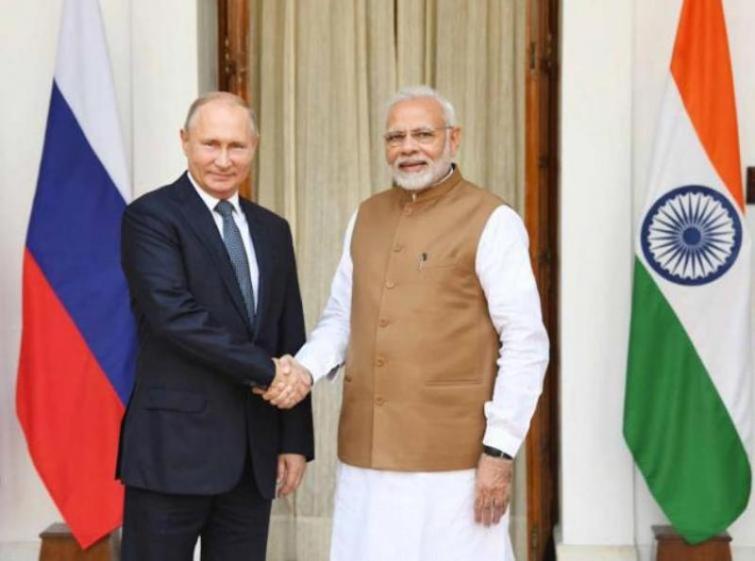 New Delhi/UNI: Several major agreements are expected to be inked during the annual bilateral summit between Prime Minister Narendra Modi and Russian President Vladimir Putin on Monday, that will see both leaders provide guidance on how to further strengthen the time-tested and strategic ties, sources said.

President Putin, who will be in India for a few hours and leave the same evening, and Prime Minister Modi will hold the 21st India-Russia annual summit, that will be preceded by the defence and foreign ministers of both countries holding the inaugural 2+2 dialogue earlier in the morning.

Both sides are looking at a number of agreements, both government to government and between other organisations, including at the level of PSUs, the sources added.

The agreements are likely in the sectors of trade, energy, culture, defence, tech, and space.

India and Russia have 15 working groups and sub groups and 12 of these groups met virtually during the last two years.

“We attach a lot of importance to the summit and we are confident that Russia is also looking at the visit in a similar manner because of our traditionally strong, and good strategic cooperation,” the sources added.

The Russian Far East is in need of manpower supply, an area that India is looking to tap. There are already Indians working in the Far East, the sources added.

In Defence, both sides have also seen increased focus on co-development and co-production, under the Make in India and Atmanirbhar Bharat initiatives. Defence cooperation includes defence exercises, procurement, co-production, research and development, the sources added.

The annual summit talks come as India has begun receiving the S-400 missile systems from Russia, to which the US has protested. “We maintain strategic autonomy in our defence procurement,” the sources added.

India has maintained that it pursues an independent foreign policy which also applies to its defence acquisition and supplies that are guided by its national security interests.

Afghanistan would also be discussed. Both sides are intensively engaged on Afghanistan, which saw both PM Modi and President Putin discuss the issue in August where they decided to hold talks at the level of their security chiefs. The Russian security chief Nikolai Patrushev came to India for the talks in September. Patrushev was in India again for the NSA-level talks on Afghanistan convened by India last month.

“We have common concerns regarding Afghanistan and are coordinating and consulting closely on the issue,” the sources added.

Regarding Pakistan and its tacit backing of terror groups, the sources said that India has shared its concerns with Russia, and Moscow "has been sensitive to our concerns". The joint statement to be issued following the summit is expected to contain strong language against the Pakistan-based terror groups.

This will be the first face-to-face meeting between Prime Minister Modi and Russian President Putin since they last met on the side-lines of the BRICS Summit in Brasilia in November 2019.

The last India-Russia Annual Summit was held in September 2019 during the visit of Prime Minister Modi to Vladivostok (Russia). The Annual Summit could not take place in 2020 due to the Covid-19 pandemic situation.

However, both leaders held 6 telephonic conversations since November 2019, apart from virtual meetings for multilateral Summits.