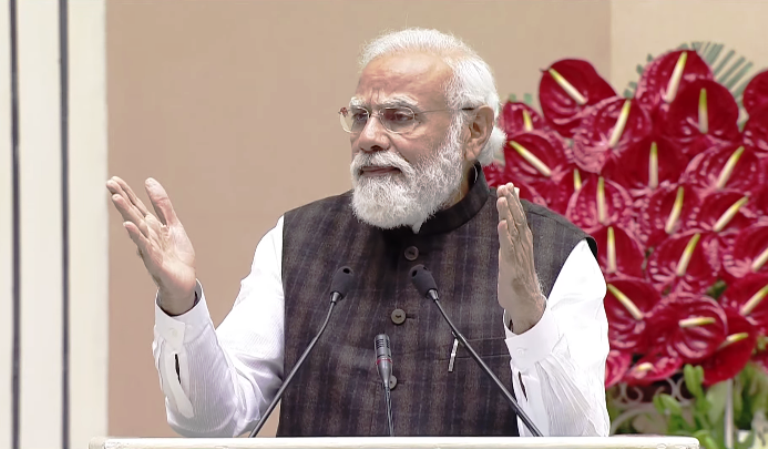 New Delhi/IBNS: Prime Minister Narendra Modi on Friday called for erasing the "colonial mindset"  that exists even today in the name of "environment" and puts obstacles in the development of "our own country".

In his Constitution Day speech, the Prime Minister noted that India is the only country in the process of achieving the goals of the Paris Agreement ahead of time.

The Prime Minister said there is no country in the whole world that apparently exists as a colony of another country.

"But this does not mean that the colonial mindset too is over. We are seeing that this mindset is giving rise to many distortions. The most obvious example of this is seen in the obstacles faced by us in the development journey of developing countries," he said.

"Efforts are being made to close the same means, the same path, for the developing countries, by the means by which the developed world has reached today's position," the PM said.

"And yet, in the name of the environment, various pressures are created on India. All this is the result of a colonial mentality," Modi said  at the central hall of Parliament in presence of Chief Justice of India NV Ramana.

He said, “unfortunately due to such a mentality, obstacles are put in the development of our own country. Sometimes in the name of freedom of expression and sometimes with the help of something else.”

The Prime Minister emphasized that this colonial mindset is a big obstacle in further strengthening the determination that was created in the freedom movement.

"Hence, both are twins. These two have come into existence only because of the constitution. So, from a broader point of view, the two complement each other even while being different," Modi said.

He underlined the importance of the concept of separation of power and said that, in the Amrit Kaal, there is need to show collective resolve within the spirit of the Constitution  as the common man deserves more than what he has currently.