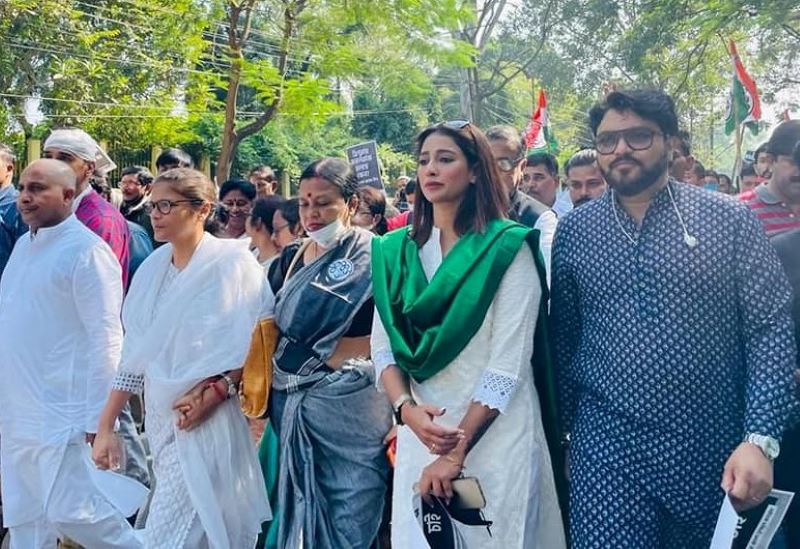 Agartala/UNI: With the deteriorating law and order situation in Agartala, Tripura police have cancelled all sorts of political gatherings including the scheduled roadshows of ruling BJP and opposition Trinamool Congress until further order except public meeting in the designated places, said IGP (Law and Order) Arindam Nath.

However, police have allowed a public meeting of Trinamool Congress national general secretary Abhishek Banerjee in front of Rabindra Shatabarshiki Bhawan in the afternoon and another meeting of BJP Mahila Morcha at Paradise Chowmuhani area of the city with certain restrictions.

Additional security forces have been deployed across the city and offices of the major party offices, markets and other vital installations. Police patrolling has been intensified across the city since last night and an order has been given to deal strictly with all the trouble mongers, police officials stated.

The vocal campaign for the ensuing civic poll is scheduled to end tomorrow and the political rallies and roadshows of all the parties have been lined up for today and tomorrow to reach out to the voters and demonstrate the strength of each of the parties.

Banerjee has a roadshow here today in favour of TMC candidates fighting in the Agartala Municipal Corporation (AMC) poll scheduled to be held on Nov 25 next.

According to police, the situation turned volatile after the detention of TMC young wing chief Saayoni Ghosh on Sunday morning.

A Women Police Station has been attacked twice, the house of TMC State Convener Subal Bhowmik was vandalized, flags and festoons of TMC were destroyed in several locations and a few houses have been attacked in the Chittaranjan area of the city last night allegedly by BJP goons.

However, BJP Spokesperson Nabendu Bhattacharjee disowned the responsibility of the attacks and incidents and said, “CPI-M and TMC have made a clandestine deal to terrorise the situation and defame BJP and the state government ahead of the civic poll. None of the attackers is from BJP, they are brought from outside by TMC and carried out the incidents with the help of CPI-M.”

Denying the charges of BJP, CPI-M leader Pabitra Kar said that all the leaders of BJP have lost their sense, as they realized people decided to throw them out from power because of misrule. Therefore, they have started mindless talk and asked, “Had BJP not been involved in the crimes why was the police made inactive? Police should detain the trouble mongers and establish the claim of BJP.”