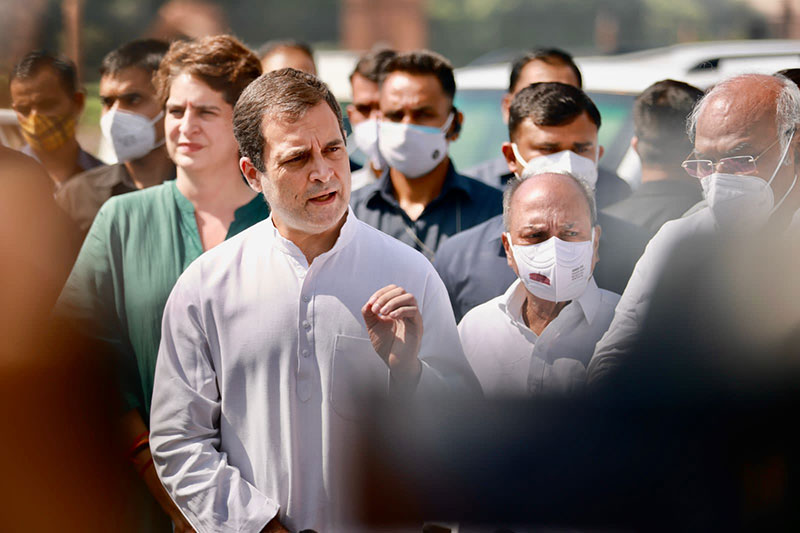 New Delhi/Agartala/IBNS: Congress top leader Rahul Gandhi has lashed out at the Bharatiya Janata Party (BJP) for its alleged cover up of the Tripura violence using the Unlawful Activities (Prevention) Act.

The violence erupted in Tripura's Panisagar town on Oct 26 after a mosque, a few houses and shops were allegedly vandalised by members of Vishwa Hindu Parishad (VHP).

Police, who have denied any vandalisation of the mosque, charged four Supreme Court lawyers, 102 social media handles under the UAPA.

Slamming the BJP, which runs the state, Gandhi tweeted on Monday, "Pointing out that #Tripura_Is_Burning is a call for corrective action. But BJP’s favourite cover-up tactic is shooting the messenger. Truth can’t be silenced by #UAPA."

Pointing out that #Tripura_Is_Burning is a call for corrective action. But BJP’s favourite cover-up tactic is shooting the messenger.

Truth can’t be silenced by #UAPA.

Police have asked social media giant Twitter to share information on the users of the handles which they claim had shared fake or fabricated pictures to stir the communal tension.

Police said in a notice, "…Some persons/ organization are publishing/ posting distorted and objectionable news items/ statements in Twitter regarding the recent clash and alleged attack upon mosques of Muslim communities in the state. In publishing these news items/ posts, the persons/ organizations have been found using photographs/ videos of some other incidents, fabricated statements/ commentary for promoting enmity between religious groups/ communities in presence of a criminal conspiracy."

"The posts have potential to flare up communal tension in Tripura state between people of different religious communities, which may result into communal riots," the notice adds.