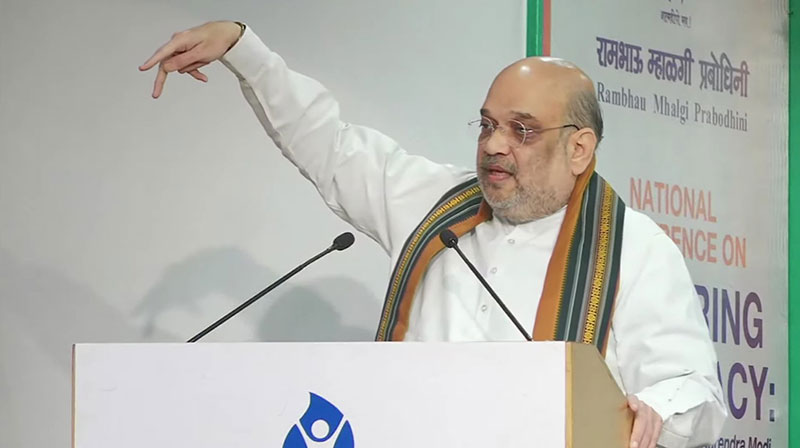 Before 2014, there was apprehension about multi-party system: Amit Shah

New Delhi/UNI: Union Home Minister Amit Shah Wednesday said before 2014, the concept of Ram-Rajya in the country had collapsed and there was an apprehension in the minds of people about the multi-party democratic parliamentary system.

He said: “When our country became independent 75 years back, the Constituent Assembly was formed, and it had accepted the multi-party democratic system thoughtfully, which was the right decision."

Lauding the Prime Minister’s work, when he was Gujarat Chief Minister, Shah said, “When Modiji became the Gujarat CM, the state had 67% enrolment and 37% dropout rates. His 'Beti Bachao, Beti Padhao' scheme to promote gender ratio and education saw a 100% enrolment and brought the dropout ratio to almost zero.

“You cannot run a nation with an army of illiterates as they will be clueless about their rights. It is the duty of the state to give them education,” he said, adding that he knows he will be trolled for saying this, but he would still reiterate."

He said "I was trolled but I'd like to say again that no nation can develop with an army of illiterates. Somebody who doesn't know his constitutional rights can't contribute to the nation.”

Recalling the 2001 Kutch earthquake, Shah said, “The state was reeling under a lot of pressure after the earthquake hit the Kutch, but he tried to change the things and did a lot of work on development.

“When he became the Chief Minister of Gujarat, he tried to bring many changes. He did a lot of work in Gujarat and worked on reforms and transparency in the state's administration,” he said.