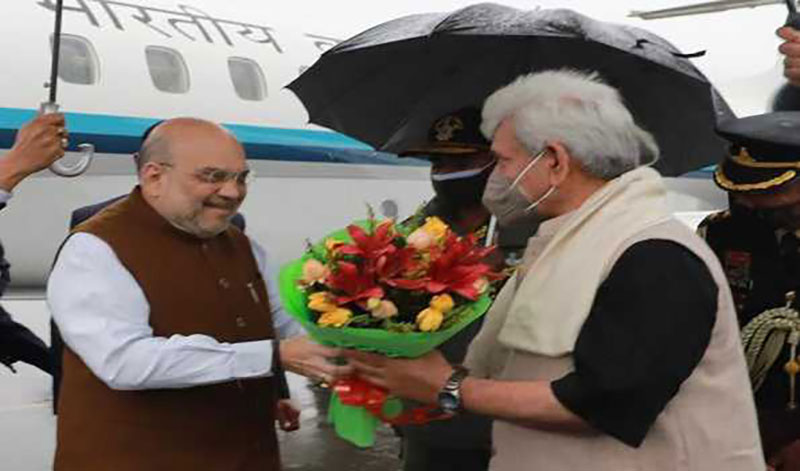 Amit Shah in Kashmir first time after revocation of Article 370

"The people of J&K have high hopes and expectations from your visit. We are hopeful that the issues related to PRIs are addressed during the visit,” Hussain said.

Honourable Union Minister Shri @AmitShah ji reaches #Srinagar. We warm heartedly welcome you in crown of #India. The people of J&K have high hopes and expectations from your visit. We are hopeful that the issues related to PRIs are addressed during the visit.

This is the first visit of the Union Home Minister after Kashmir's special status was revoked on Aug 5, 2019.

The visit comes at a time when there has been a series of targeted killings of minorities and migrant workers and the ongoing Poonch encounter that has seen the death of nine soldiers.

Shah is scheduled to chair a security review meeting which would be held at Raj Bhawan.

Top brass of the security apparatus of the country, including the Intelligence chief, BSF chief, CRPF director general and other top security officials will be present at the meeting.

The top security brass of the country along with J&K police chief would brief the minister about the overall situation.

The meeting may devise a fresh strategy to deal with terrorists, officials said.

Shah will also inaugurate direct international flights from Srinagar to Sharjah this evening.

The Union Minister will also interact with young members of J&K’s Youth Clubs.

In Srinagar, he might also meet the family members of the civilians, who were killed on Monday.

Shah will also be visiting Jammu where he is scheduled to address a public rally.

In Srinagar, a security blanket has been thrown across the city to ensure Shah's visit passes off peacefully.

While patrolling and frisking has been intensified over the last few days, drones have also been pressed into service for aerial surveillance of the city.

Additional deployment of forces has been made across the city. New bunkers have come up to keep a vigil in the vulnerable areas.

Security around the areas with minority populations are also being patrolled with drones. Sharp shooters have also been deployed at vintage points in many parts of the city, police said on Saturday.

This month Srinagar has witnessed three brief gunfights and seven civilians have been killed in targeted attacks.