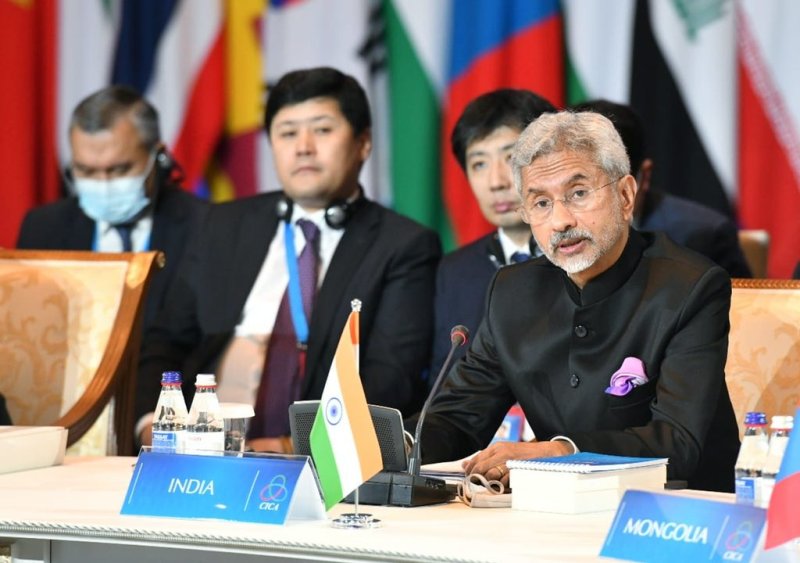 Ensuring Afghan territory is not used for supporting terrorism a priority: S Jaishankar

Nur Sultan/New Delhi/UNI: External Affairs Minister S Jaishankar on Tuesday said the developments in Afghanistan have generated understandable concern in the region and beyond, and ensuring that Afghan territory is not used for supporting terrorism is a priority.

In his remarks at the Joint Meeting of CICA Foreign Ministers with the President of Kazakhstan, Kassym-Jomart Tokayev, at the Akorda presidential palace, Jaishankar said: “Recent developments in Afghanistan have generated understandable concern in the region and beyond."

"Ensuring that Afghan territory is not used for supporting terrorism and promoting the formation of an inclusive Government are widely recognised as priorities," he said.

He said the Conference on Interaction and Confidence Building Measures in Asia (CICA) can be a positive factor in shaping the response of the international community on Afghanistan.

“Strengthening our collective resolve to tackle terrorism, arms trafficking, narcotics trade and other forms of trans-national crimes is more important than ever before,” he said, adding that the habits of cooperation encouraged by CICA can be helpful in this regard too.

2. Covid response has brought out the limitations of current multilateralism. Case for reformed multilateralism is strong. pic.twitter.com/VmdahK5jFk

Jaishankar said the changes in the world order that are reflected in the consolidation of CICA also make a powerful case for reformed multilateralism. “Our diverse world must find more ways to practice democratic decision making.”

He said the “Developments in Asia are closely connected with those of the world. Whether it is the scourge of terrorism and extremism, the health, economic and social effects of the pandemic, the protection of the global commons or the goals of sustainable development, we must appreciate the indivisibility of our existence."

He said members of the CICA are fully committed to the goal of enhancing peace, security and stability in Asia.

Kazakhstan is the current chair of CICA.

CICA is a forum aimed at enhancing cooperation through elaborating multilateral approaches towards promoting peace, security and stability in Asia. CICA was established at the initiative of then Kazakh President Nursultan Nazarbayev at the 47th UNGA in 1992.

It has 27 members including India and Pakistan.

The region covered by CICA stretches from the Pacific to the Mediterranean and from the Ural to the Indian Ocean, covering more than 50 percent of the world’s population.