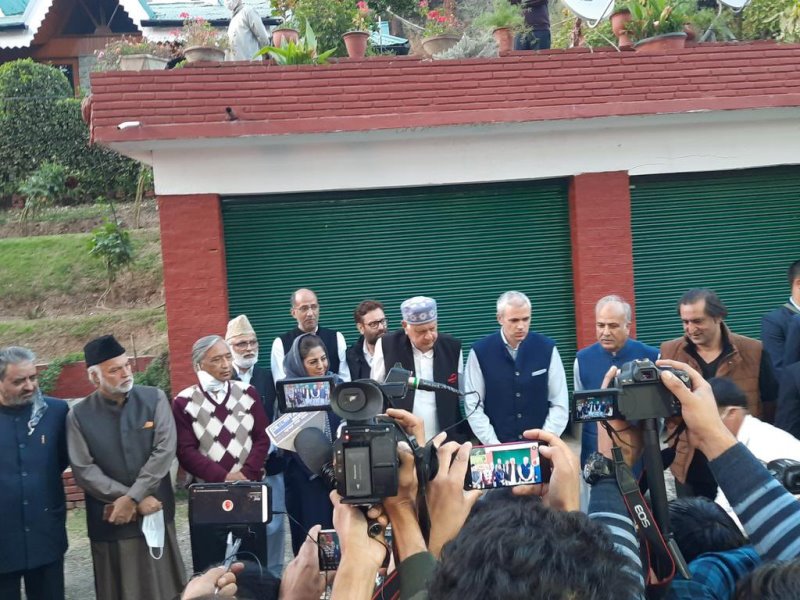 Srinagar/UNI: The People’s Alliance for Gupkar Declaration (PAGD ) on Friday condemned the recent killing of civilians in Kashmir valley and blamed the Centre’s policies for the prevailing situation in Jammu and Kashmir.

The meeting was called in the backdrop of Thursday’s incident, in which the terrorists had killed the principal and a teacher of a government school in Srinagar's Eidgah area.

Attacking the Centre, the alliance said, “Whether it was demonetization or removal of Article 370, these decisions were sold to the country as a solution to the problems of militancy and alienation in Kashmir."

“The PAGD unreservedly condemns the recent killings of innocent people in the Valley. These killings have created a climate of fear that has not been seen in Kashmir since the early 90's,” it said.

In fact, some recent decisions of the administration have only served to heighten differences between the communities that otherwise were living peacefully amongst each other,” the alliance said.

Saying the onus to create a conducive security environment lies with the Government ,the alliance said, “we as responsible political parties of Jammu & Kashmir will play our role to the best of our ability to reduce the levels of suspicion and fear.”

Recalling Prime Minister Narendra Modi's meeting on June 24 , the PAGD said, “He acknowledged "Dil Ki Doori ore Dili Say Doori '' while promising to correct this distance. Unfortunately, nothing has been done in this regard since that meeting.

“Arbitrary detentions and excessive use of force continue to be the norm in Jammu and Kashmir” they alleged.

Asking the government to not use the “shoot at sight policy” by the security forces it said, “The killing of Yasir Ali Thursday evening is the direct result of the heightened state of alert and justification for use of force.

“Harassment of innocent civilians and the killings like Yasir Ali will only serve to worsen the situation in Jammu & Kashmir,” it said.

According to the J&K police statement, “So far 28 civilians have been killed by terrorists in 2021. Out of 28, five persons belonged to the local Hindu/Sikh community and two non-local Hindu labourers."