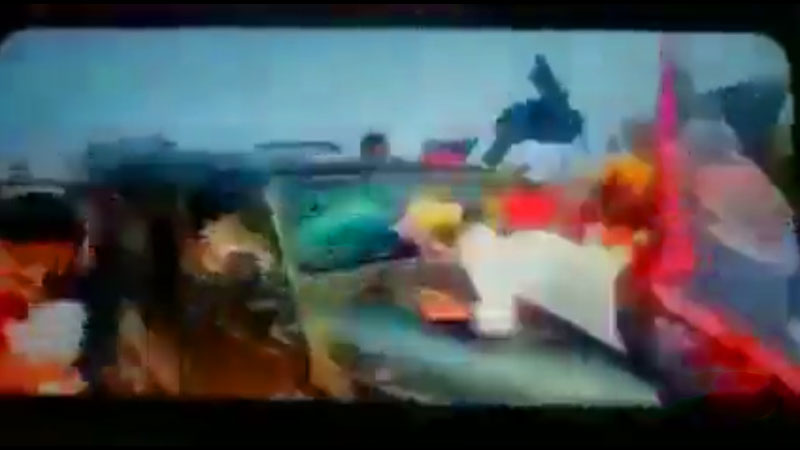 New Delhi/IBNS: The Congress has released a video on Twitter showing a jeep was allegedly mowing down a group of protesting farmers in Uttar Pradesh's Lakhimpur Kheri, where eight people died in a violence, media reports said.

In the video, the authenticity of which has not been verified by India Blooms independently, shows a SUV car following the jeep.

Congress posted the video on Twitter with a caption that reads, "The silence from the Modi govt makes them complicit."

The silence from the Modi govt makes them complicit. pic.twitter.com/IpbKUDm8hJ

Eight people including four farmers died during a violence which broke out in Tikunia village between the agitators and individuals belonging to the convoy of Union Minister Ajay Mishra's son Ashish Mishra.

The Uttar Pradesh government, which is also facing flak over the incident, has announced Rs. 45 as compensation to each of four families of the four dead farmers and declared a retired High Court judge will probe the incident.

Congress general secretary Priyanka Gandhi Vadra, who is leading her party's protest against the incident, was detained by police while she was on her way to Lakhimpur.

The Congress top leader claims she is still in police custody.

Raising direct questions at Prime Minister Narendra Modi, Priyanka tweeted, "Narendra Modi ji, your government has kept me in custody for the last 28 hours without any order or an FIR. The person who mowed down the farmers is yet to be arrested. Why?"

In a letter to Uttar Pradesh Chief Minister Yogi Adityanath, Bharatiya Janata Party (BJP) MP Varun Gandhi demanded a murder case to be lodged against those involved in the incident and a probe by the Central Bureau of Investigation (CBI).

Varun Gandhi has also asked for patience and restraint while dealing with the farmers who are protesting against the contentious farm laws since Nov 2020.