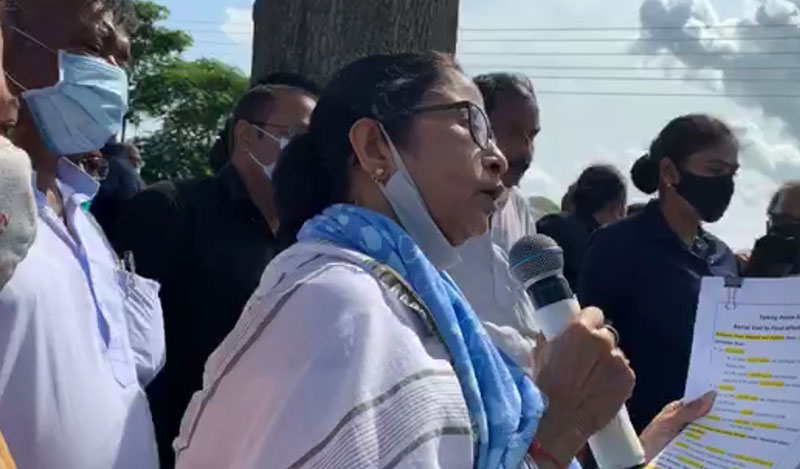 Kolkata/UNI/IBNS: West Bengal Chief Minister Mamata Banerjee Saturday embarked upon an aerial survey of the submerged areas as nearly 2.2 million people in six South Bengal districts and their neighbourhood have been severely affected following discharge of water from four dams, including DVC.

Army has been deployed to assist the civil administration.

Though the water release was reduced from DVC, Mython, Panchet and Tilpara, the woe of the marooned people continued to remain grim after surging waters inundated more areas of Ghatal in Medinipur, Nanoor in Birbhum and a vast areas of Bankura district.

Police rescued and evacuated a pregnant woman, who was rushed to a hospital, about three km by a speedboat for delivery in the wee hours Saturday.

Banerjee Saturday told reporters, "The anger is growing. Jharkhand should look into the situation and even talk to DVC. We do not want any friction with any state. We want all states to work together."

Small and medium-sized boats are the only mode of transportation in hundreds of villages across the six affected districts, including Howrah, Hooghly, West Bardhaman and Birbhum, where NDRF personnel have already been deployed to rescue the marooned people.

While three columns of Army each have been deployed in West Bardhaman and Hooghly, the remaining two columns have been pressed into service in Howrah district.

So far two people, including a four-year-old boy, died in Ghatal.

Nearly 200 boats have been pressed into the service.

Banerjee Friday accused the DVC of discharging water without prior information to the state.

She also came down heavily on Bihar and Jharkhand for this deteriorating condition in the state and described the situation as ''man-made''.