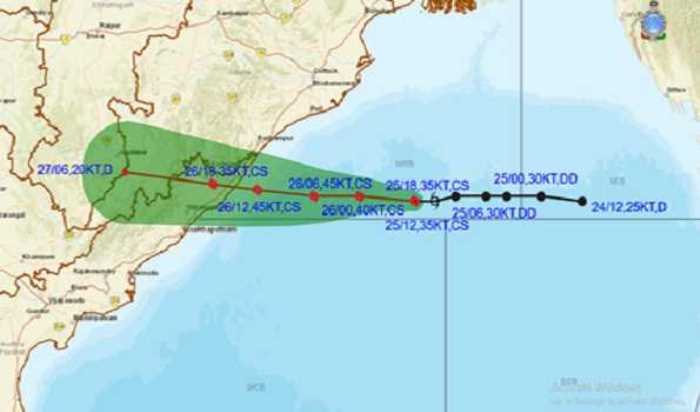 Hyderabad/UNI: The cyclonic storm ‘Gulab’ (pronounced as Gul-Aab) over Northwest and adjoining west central Bay of Bengal moved nearly westwards with a speed of 7 kmph in the last six hours and is likely to cross north Andhra Pradesh- South Odisha coast on Sunday.

The cyclone lay centered at 2:30 hours on Sunday, over Northwest and adjoining West central Bay of Bengal near Latitude 18.3°North and Longitude, 87.7°East, about 310 km East-southeast of Gopalpur (Odisha) and 380 km east of Kalingapatnam (Andhra Pradesh).

Tidal wave of about 0.5 m height above the astronomical tide likely to inundate low lying areas of Srikakulam, Sompeta, Vizianagaram districts in North Andhra Pradesh and Ganjam district in Odisha during the time of landfall.

Andhra Pradesh Chief Minister Y S Jagan Mohan Reddy at a review meeting held on Saturday, on the preparedness in the wake of Cyclonic storm, directed the officials to take all necessary steps.

The officials informed the Chief Minister that they have alerted District Collectors to take all steps.

Control rooms have been set up at Village Secretariat-wise.

The officials said they have readied disaster management staff in Srikakulam and Visakhapatnam districts.

The District Collectors are taking steps to set up relief camps at required locations, the officials said.

The Chief Minister also directed the officials to be alert and take necessary steps as there are chances of heavy rains after the Cyclonic storm crosses the coast.