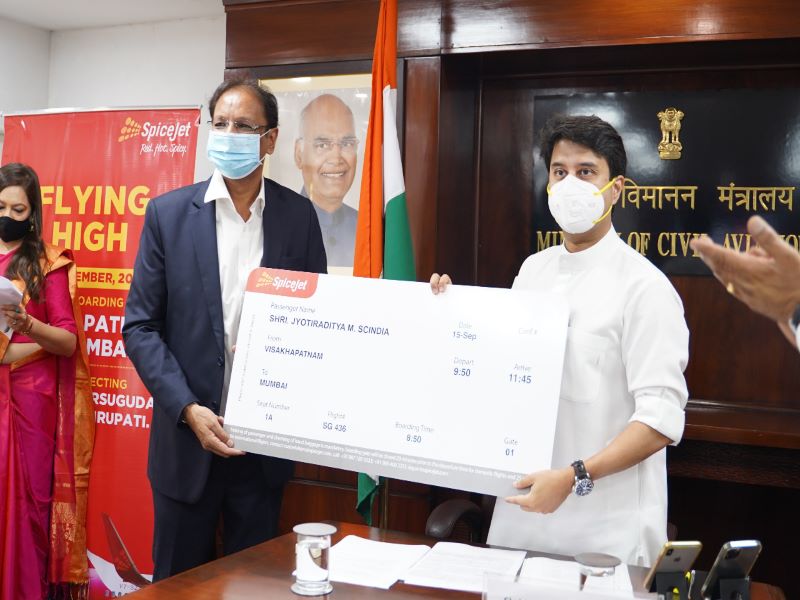 The beginning of direct flights from one of India's industrial and tourist hubs Vishakhapatnam in Andhra Pradesh to India's financial capital Mumbai is in accordance with Prime Minister Narendra Modi's vision of bolstering economic growth through better connectivity, Scindia said.

“It’s the vision of our Prime Minister Shri Narendra Modi to enable economic growth through better connectivity of not only metros of the country, but also of India’s hidden jewels like Visakhapatnam," he said.

Scindia underscored that the direct connectivity to Mumbai will open up the potential for employment, tourism, benefit students & will further act as an economic multiplier for Visakhapatnam.

"Through our policy of UDAN - Ude Desh Ka Aam NAgrik, better aerial connectivity is being pushed to the hinterlands of India. India is on a cusp of a travel revolution," he said.

Today, 38 more flights were launched in various states of the country, he added.

Visakhapatnam is now connected with 10 cities with 302 aircraft movements as on date, and the government plans to increase these numbers through various initiatives, he said.

Currently, only the Air India group operates flights on the Vishakhapatnam – Mumbai route, and the additional flight has been a long pending demand of the natives.

The additional flight by SpiceJet aligns with the objectives of the Sab Uden Sab Juden initiative of the government of India that aims to strengthen aerial connectivity of Tier-2 & Tier-3 cities of the country, the civil aviation ministry said in a statement.

Spicejet will deploy Boeing 737 aircraft on the Vishakhapatnam – Mumbai route.

"Moreover, under Centre's Gati Shakti plan, all infrastructural developments will help raise the global profile of local manufacturers and help them compete with their counterparts worldwide. It also raises possibilities of new future economic zones," the statement read.

Visakhapatnam, also popularly known as Vizag, is one of the oldest port cities in the country and is known for its picturesque beaches and serene landscape.

The port of Visakhapatnam is renowned for being home to the oldest shipyard in India, and with a plethora of manmade wonders and natural spectacles.

Visakhapatnam is a must-visit tourist destination in South India for its cultural richness and tourism vastness.