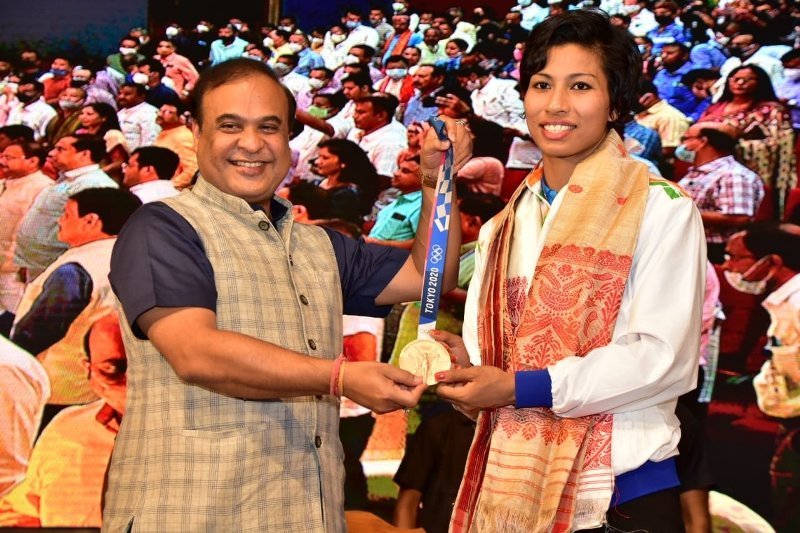 Assam showers awards on boxer Lovlina Borgohain, to name a road after her

Guwahati/UNI: It was raining rewards for Assam’s Lovlina Borgohain as she arrived in her home state on Thursday after securing the bronze medal in boxing at Tokyo Olympics.

Lovlina who arrived at Guwahati to a rousing reception was presented a cheque of Rs 1 crore by the Chief Minister Himanta Biswa Sarma and offered a DSP post in Assam police for her feat in the Tokyo Olympics.

Glad to have felicitated our pride @LovlinaBorgohai, the 1st from Assam to win an Olympic medal, on behalf of state’s people & GoA at Srimanta Sankardev Kalakshetra.

Her success at #TokyoOlympics would remain etched as a milestone in the sporting history of Assam & India. 1/4 pic.twitter.com/RUyRKZ0HH2

A road in Guwahati will be named after Lovlina and a stadium will be constructed in her name in Golaghat, Sarma announced.

A sports complex worth Rs 25 cr will be built at @LovlinaBorgohai's native, Sarupathar, to help local youth excel in sports. A road in Guwahati will also be named after our star player Lovlina.

The government has also decided to give Rs 10 lakh to the boxer’s coach.

Lovlina will be also given Rs 1 lakh per month till the next Paris Olympic to take care of her nutrition and practice.

The 23-year-old boxer said she is sad that she failed to win the gold medal in the Olympics.

“I again thank the people of Assam. I am sad that I failed to win the gold medal. But I am so happy that many people have come to receive me. I have won the Olympic bronze medal because of your blessings,” Lovlina told reporters outside the airport.