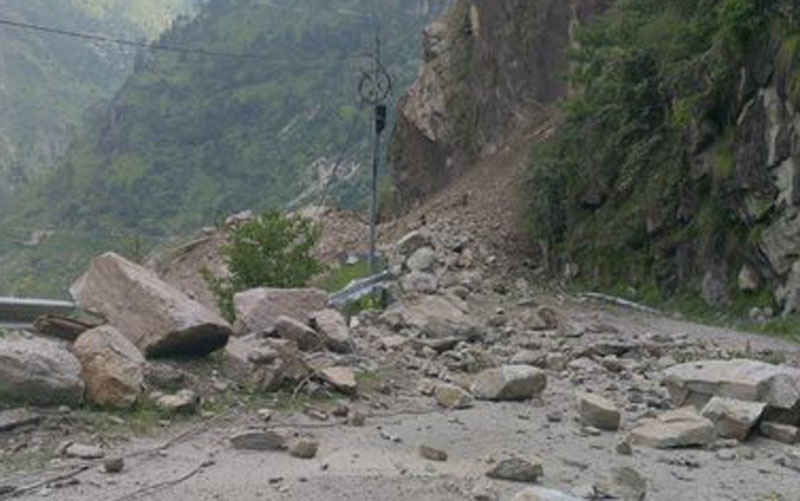 Shimla: At least 25 people are feared to be trapped under debris from a landslide which hit Negalsari near Bhavnagar at the Hindustan-Tibet National Highway here on Wednesday, officials said.

At least five vehicles, including a truck and a bus, are totally damaged and lay beneath the debris of the landslide, Deputy Commissioner Kinnaur Abid Husan Sadik told UNI.

The driver of the bus has been rescued, however, the passengers of the bus and occupants of the cars, still remain trapped, Sadik said.

The bus belongs to Himachal Roadways Transport Corporation and was en-route Murang-Haridwar.

Though the National Disaster Response Team has been called, the full-scale rescue operation failed to commence as the shooting stones and boulders were still slipping on the road between Bhavnagar- Negualseri in Kinnaur district about 130 km from here.

The teams from State Administration Response (SAR), Indo-Tibetian Border Police (ITBP) and local police have also arrived at the spot.

The casualty from the mishap can not be ascertained as the rescue teams are yet to begin the operations, the DC said.

As per the visuals from the site, the truck is completely destroyed and lay overturned, indicating the intensity of the landslide.

Meanwhile, Prime Minister Narendra Modi spoke to the CM and assured all kinds of help to him to conduct the rescue operation.

PM @narendramodi spoke to Himachal Pradesh CM @jairamthakurbjp regarding the situation in the wake of the landslide in Kinnaur. PM assured all possible support in the ongoing rescue operations.

"PM @narendramodispoke to Himachal Pradesh CM @jairamthakurbjp regarding the situation in the wake of the landslide in Kinnaur. PM assured all possible support in the ongoing rescue operations," PMO India tweeted.