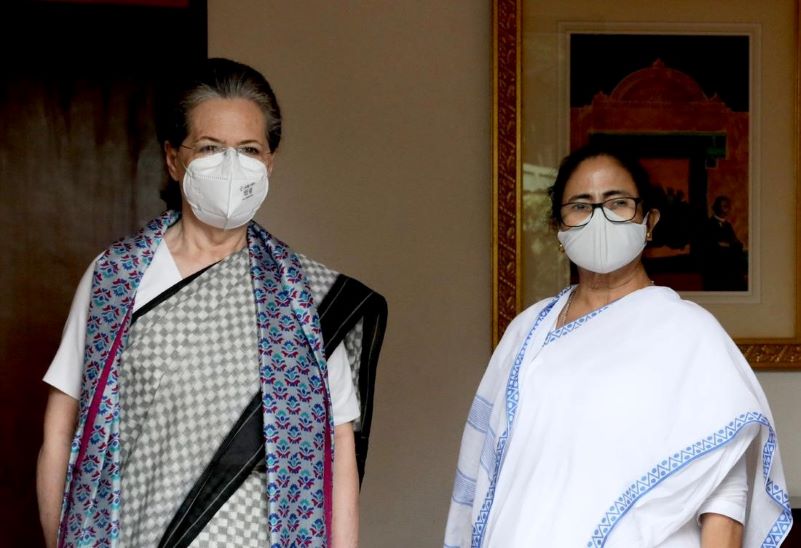 I am nobody alone, Opposition should unite to defeat Modi: Mamata after meeting Sonia, Rahul

Banerjee, whose party MPs skipped an Opposition protest led by Congress MP Rahul Gandhi over snooping outside Parliament in the afternoon, said she had a "positive meeting" with the two leaders.

"Rahul ji was also there (in the meeting). We met and discussed the political situation in general from Pegasus to COVID-19 to Opposition unity. It was a very good, positive meeting. The positive result must come out in the future," she said.

The Trinamool Congress (TMC) supremo added, "All should unite to defeat the BJP. I am nobody alone. All should be together. I am a cadre and a street person."

Though the TMC MPs skipped the protest this afternoon, Banerjee's party is working together with the Congress in Parliament, in a bid to corner the Modi government on a number of issues including the pot-boiling Pegasus spyware.

On the Pegasus issue, Banerjee, a former MP and an ex-Union Minister, said, "The government should reply in Parliament on Pegasus. The country wants a reply from the government. Pegasus is an issue which should be debated in Parliament and not over tea."

Disperate opposition forces sans the TMC Wednesday came together outside Parliament to corner the Modi government on the Pegasus spyware issue, which has turned out to be a new political flash point.

Taking a dig at the "Opposition unity", BJP spokesperson Sambit Patra Wednesday afternoon said, "Mamata ji is having tea with Sonia Gandhi ji and saying they are united. All opposition leaders were united on a stage in Karnataka in 2018. Rahul Gandhi and Akhilesh Yadav had fought elections together. All opposition leaders were present in a rally in Kolkata. What was the result? All are trying to save their own families."