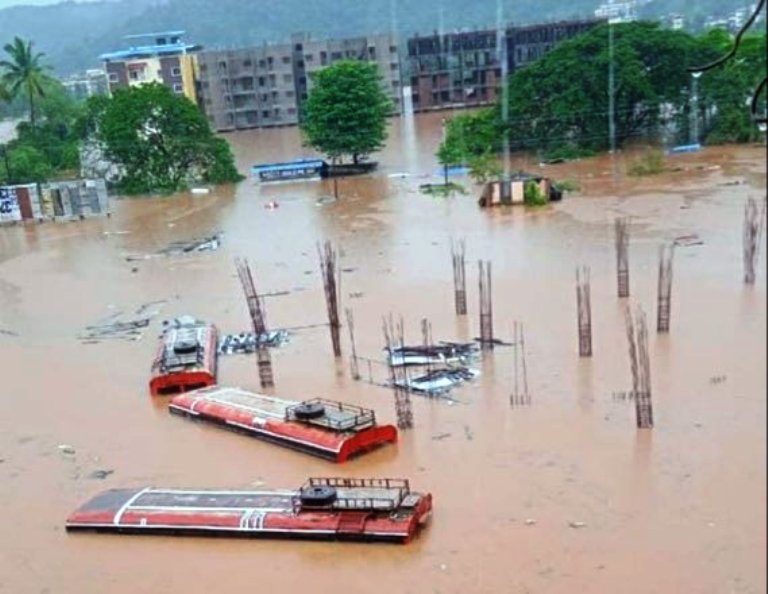 Mumbai/IBNS: Heavy rains battered the state of Maharashtra causing floods and property damage  across the Konkan region of the state, media reports said.

Rescue operations are currently being carried out across various districts which have reported waterlogging with cars getting submerged and people suffering from the ravage.

Spoke to Union Home Secretary Shri AJAY Bhalla ji about grim flood situation in Chiplun, Dist Ratnagiri in Maharashtra and requested him to send NDRF teams for rescue and relief of the affected ! He assured immediate action ! Praying for the well-being of people in Konkan! pic.twitter.com/yyzY0tO11o

Incessant rain in the Konkan region for several days caused major rivers in Ratnagiri and Raigad districts to overflow above the danger levels.

Several long-distance trains have been stopped, cancelled or rescheduled on the Konkan Railway route.

According to railway officials, around 6,000 passengers were stranded in trains which were regulated at various stations on the Konkan Railway route.

Rescue operations are also being carried out in flooded Chiplun, around 240 km from Mumbai, which is possibly the worst affected in the state.

Stranded locals are being moved to safety by the Indian Coastguard. The Mumbai-Goa Highway has also been shut due to severe flooding in the town.

In scary visuals, buses can be seen completely submerged under water - only the tops are visible. The local market, bus station and railway station are all submerged in Chiplun.

Many houses nearby have flood water level reaching upto 8-10 feet.

The Coastguard has deployed a disaster relief team in every affected region and a team of 35 officers are involved in the rescue ops.

The National Disaster Response Force (NDRF) has deployed nine rescue teams, including four in Mumbai and one each in Thane and Palghar districts. One team reached Chiplun and two others were sent to Kolhapur.

Units of the Indian Navy and the Indian Army have joined the rescue and relief efforts in Ratnagiri as well as Raigad districts, the Chief Minister's office informed.

Update on the ongoing Rescue & Relief operations in flood-affected areas of Maharashtra;

Units of the Indian Navy & the Indian Army have joined the rescue & relief efforts in Ratnagiri & Raigad districts.

The India Meteorological Department (IMD) had earlier placed Mumbai on a "yellow alert" after it predicted intense to very intense rains in the city.

The rivers in Raigad, Thane, Ratnagiri & Kolhapur, have crossed the danger mark.

Units of NDRF, Coast Guard & the Navy have been deployed there.

Several parts of Mumbai were waterlogged on Thursday morning as heavy rainfall continued overnight in the city.

Thackeray also spoke to Prime Minister Narendra Modi and apprised him about the flood situation caused in parts of Maharashtra due to torrential rains.

He also informed the PM about the ongoing rescue and relief works. Modi has assured of all possible support from the Centre.

CM Uddhav Balasaheb Thackeray spoke to Hon’ble PM Shri @narendramodi & apprised him about the flood situation caused in parts of Maharashtra due to torrential rains. He also informed him about the ongoing rescue & relief works. The Hon’ble PM has assured of all possible support.