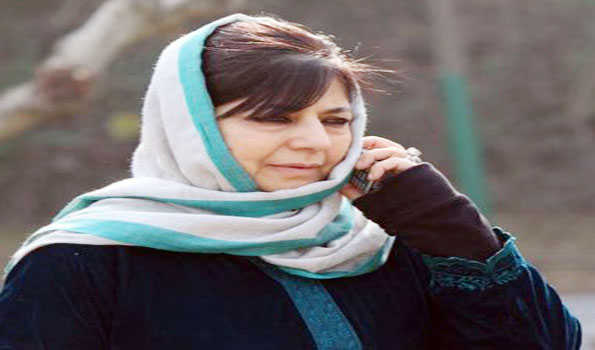 Srinagar/UNI: Questioning the legitimacy of an encounter in which three militants were killed in south Kashmir district of Kulgam on Wednesday, former chief minister and Peoples Democratic Party (PDP) president Mehbooba Mufti on Friday said the government must come clean on the issue.

Mehbooba was reacting to allegation made by the family of one of the slain persons that their son, identified as Zakir Bashir, was killed outside their residential house and was not a militant.

The former chief minister said encounters occur on daily basis in J&K, but when legitimate questions are raised the security forces must be held accountable.

“The parents of the 17-yr-old minor killed in the Kulgam gunfight claim that he was an innocent civilian. GOI must come clean on these allegations,” Mehbooba wrote on micro-blogging site twitter.

However, police has refuted these allegations, saying that the youth had joined militant ranks a few days ago.

A police official said rumours are being spread by vested interests that a Lashkar-e-Taiba (LeT) militant Zakir Naik, who was killed in Chimmer in Kulgam on June 30, wasn't a militant.

“The fact is that he had joined militant ranks just a few days before he was eliminated,” he said.

He said people should not believe in rumours, adding legal action will be taken for spreading rumours.

Police had claimed that three LeT militants were on Wednesday killed and two Army soldiers injured in the encounter which ensued after security forces launched a Cordon and Search Operation (CASO) in Kulgam.

On July 18 last year, Army had claimed to have killed three militants in south Kashmir district of Shopian. However, separate investigations by police and Army later found that the encounter was staged and three labourers from Rajouri were killed and dubbed as militants. An Army officer of the rank of a captain and two others were found culpable in the killings.