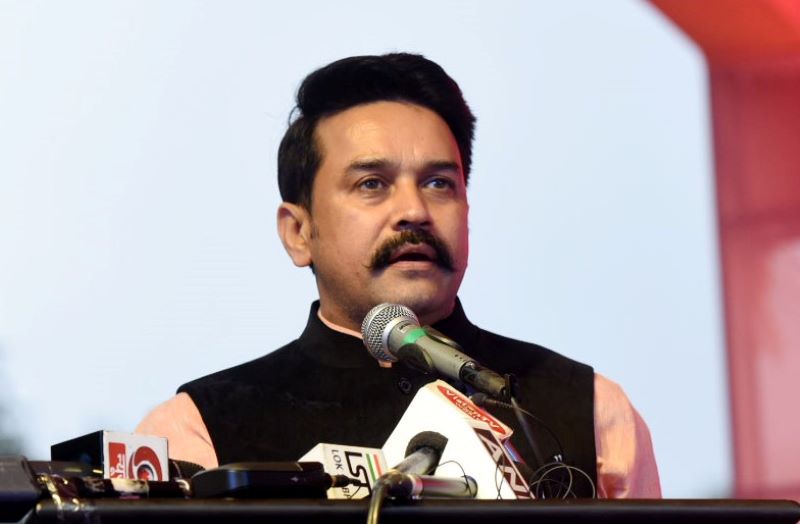 Hamirpur/UNI: Union Minister of State for Finance and corporate affairs, Anurag Thakur has blasted the Congress party for its tirade on the mass vaccination program going on in India to contain the COVID-19 adding that it was most unfortunate that the vaccines were being wasted in the Congress-ruled states.

In a statement last night, he said that the wasting of vaccines in the Congress-ruled states were unfortunate and anti-people that were demanding the vaccines for them.

Thakur said that the central government under the leadership of Prime Minister Narendra Modi was continuously supplying the vaccine for the people of the country to be safe during the corona pandemic.

He said, “The Modi government is making every effort to supply the vaccine to the states according to their need, but it is unfortunate that even in the vaccination issue, the Congress leaders are not deterred from doing politics. Congress's crown prince Rahul Gandhi sheds crocodile tears every day over the lack of vaccines and gives advice to the central government.

"On the other hand, Congress-ruled state governments are doing the unfortunate task of misleading the public and defaming the central government to expose their shortcomings and mismanagement."

The Bharatiya Janata Party (BJP) leader alleged that the vaccines were being wasted by the Congress party rulers and in the state of Rajasthan more than 11.50 lakh vaccine doses had been wasted earlier.

Now thousands of doses of vaccine have been found in garbage cans at 35 vaccination centers in ten districts of the state. Surprisingly, most of the vials were 20 to 75 percent full.

He said that Chief Minister Gehlot along with Rahul Gandhi and other senior Congress leaders have launched a misinformation campaign against the vaccines but that was unethical and unfounded.

Thakur said, “Not only Congress is wasting the vaccines and is dirty politics, others like (Arvind) Kejriwal, Mamata Banerjee, Pinarayi Vijayan, Bhupesh Baghel to Hemant Soren have also joined hands to criticize the central government for no reasons”.

He said, ”The innocent people have to bear the brunt of their shamelessness, selfishness, and ambitions. But every worker of the Modi government and BJP is standing shoulder to shoulder with 135 crore Indians in the hour of disaster”.