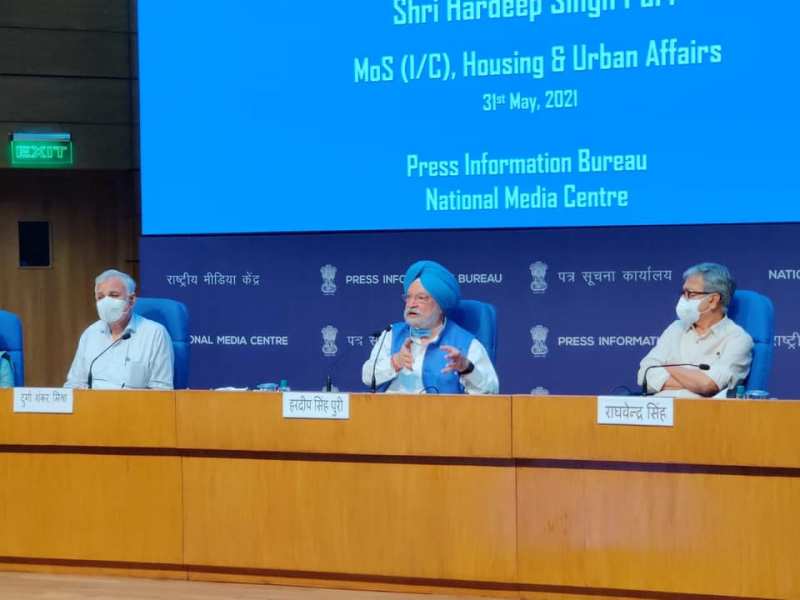 New Delhi/IBNS: Hours after the Delhi High Court on Monday rejected a petition seeking suspension of the ongoing construction of the Central Vista Project in the national capital amid the Covid-19 pandemic, Union Minister Hardeep Puri said a false narrative was being propagated over the plan.

He clarified that no heritage building would be touched.

"A new Parliament was needed because the current one lies in the seismic zone 4 and because we will be celebrating 75th anniversary as an independent country in 2022," he told Times Now channel.

Speaking at a press conference, he said, "This is motivated criticism, there is no relation between expenditure on the health sector and the Central Vista project."

Cleared the air around Central Vista Project & laid rumours, hearsay & fake narrative about the project to rest during a vibrant interaction with the discerning & knowledgeable members of the media fraternity today. pic.twitter.com/fLoNffZPEY

“This project began, if reports are to be believed, because of a superstitious belief that the present Parliament building is ‘unlucky’” How someone can put their signature on this bizarre letter defies logic!" he said.

Puri clarified that no design was cleared for the construction of a new Prime Minister's residence and only two projects - the Parliament building and the widening of the central vista stretch - were on progress.

"Conceptual designs of PM Residence have still not been presented to the Ministry," he said.

"Currently, two new projects are underway- the New Parliament Building and Central Vista Avenue. A decision on these projects was taken before the pandemic. The total cost of the project is around ₹ 1300 crore," the Union Minister told the media.

Earlier, he had called a report by The Times of India "fake" which was titled "Work on PM residence likely to star on August".

Calling the report "amusing", he clarified: "Conceptual designs of PM Residence have still not been presented to the Ministry. Further, before construction starts, the design has to be finalised, approved and works have to be awarded after tendering."

Unless a leading news daily has decided to go ahead with the project on its own, its report on the front page has no basis.

Conceptual designs of PM Residence have still not been presented to the Ministry. pic.twitter.com/RLdlSyTxrl

"None of the historic iconic cultural buildings will be touched. They will remain exactly as they are," he said.

Earlier in the day, a division bench of Chief Justice DN Patel and Justice Jyoti Singh dismissed public interest litigation seeking the temporary suspension of construction work on the project.

The Delhi Management authority, the bench said, has nowhere questioned the construction work.

Moreover, the government had ensured that the workers were "staying on site" and complying with the Covid-19 appropriate behaviour.

"As the workers are staying on site, no question of suspending the construction work arises in light of Covid-19," the bench said.

“This is a motivated petition preferred by the petitioner and not a genuine petition. The petition was dismissed with a cost of Rs 1,00,000, said the bench, adding that the Central Vista was a “vital, essential national project," the bench observed.

The legality of the project has been upheld previously by the Supreme Court itself. They are supposed to complete the work by November 2021. Time is of the essence in the contract. The work has to be completed.

On May 17, the court had reserved the verdict on the plea filed by Anya Malhotra, a translator, and Sohail Hashmi, a historian and documentary filmmaker, who expressed concern over the “super spreading potential and threat” posed by the construction work at the project site for the workers.

The Centre, the petitioners alleged, had also violated the disaster management authority circular as only emergency or essential services are allowed during the lockdown.