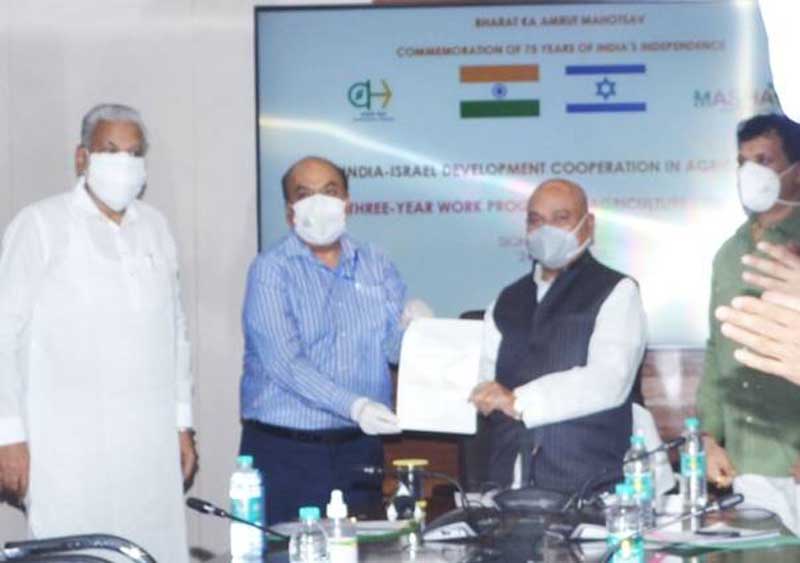 Every year, these COEs produce more than 25 million quality vegetable seedlings, more than 387 thousand quality fruit plants and train more than 1.2 lakh farmers about latest technology in the field of horticulture.

Due to the agrarian policies of the Government of India, there is a definite change in the lives of the farmers and the agriculture sector.

Increasing the farmers' income is the determination of Prime Minister  Narendra Modi.

The minister said that India and Israel have had bilateral relations since 1993 in the agricultural sector.

This is the 5th IIAP.

This new work programme will further strengthen the bilateral relations and mutual cooperation between the two countries in the field of agriculture for the benefit of the farming community.

The COEs established under these Israeli-based action plans are playing an important role in doubling farmers’ income.

"The exchange of technology between India and Israel will greatly improve the productivity and quality of horticulture, thereby increasing the income of farmers”, he added.

Sanjay Agarwal, Secretary, Department of Agriculture, Cooperation & Farmers Welfare said, “These Centers of Excellence established under Indo-Israel Agriculture Action Plan (IIAP) have become epicentres of transformation in horticulture sector. Our focus during the new work programme will be to convert the villages surrounding these COEs into Villages of Excellence through massive outreach programmes.”

Ambassador Dr. Ron Malka said, “The three-year work program (2021-2023) reflects the strength of our growing partnership and will benefit local farmers both through the Centers of Excellence and the Villages of Excellence.”

As for the “INDO-ISRAEL Villages of Excellence”, this is a new concept aimed at creating a model ecosystem in agriculture across eight states, alongside 13 Centers of Excellence within 75 villages.

The program will promote the increase of net income and better the livelihood of the individual farmer, transforming traditional farms into modern-intensive farms based on IIAP standards.