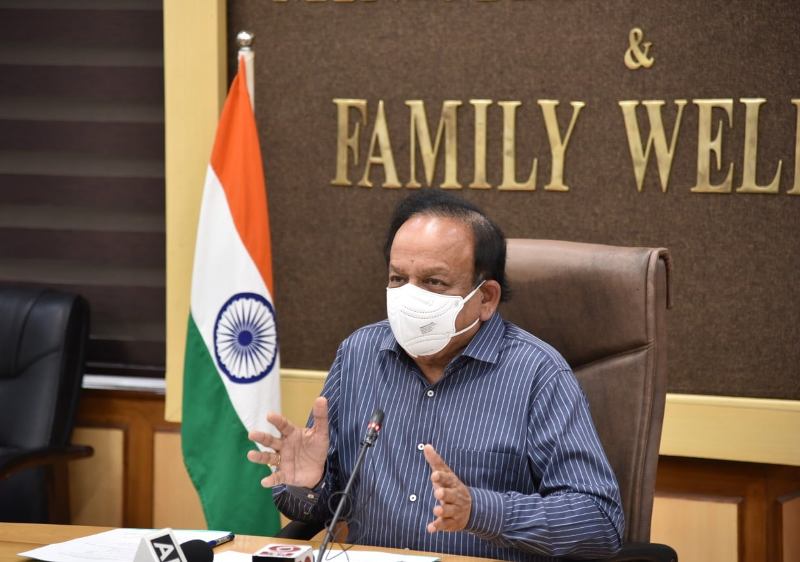 New Delhi/IBNS: After Maharashtra Minister Rajesh Tope's concern that states might run out of Covid-19 vaccines, Union Health Minister Harsh Vardhan on Wednesday slammed such "deplorable attempts by some state governments to distract attention from their failures and spread panic among the people".

Harsh Vardhan said there is no vaccines shortage and such "irresponsible statements mislead the public and spread pandemic."

He in fact blamed the "lackadaisical attitude" of the Maharashtra government that had singularly diluted the entire country's efforts to fight the virus.

In an attempt to set the record straight, a furious Harsh Vardhan said: "I am constrained to speak out now because my silence should not be misconstrued for weakness. Playing politics is easy, but improving governance and health infrastructure is the real test."

This comes after Maharashtra Health Minister Rajesh Tope said earlier in the morning that the state may run out of Covid vaccines in three days.

Tope also mentioned that he had asked the Centre to send more stocks soonest, with cities like Mumbai forced to shut down vaccination centres or turn away people.

Responding to the statement, Harsh Vardhan said that such remarks were "nothing but an attempt to divert attention from the Maharashtra government's repeated failures to control the spread of pandemic."

"The inability of Maharashtra government to act responsibly is beyond comprehension. To spread panic among the people is to compound the folly further," he added, dismissing the issue of vaccine shortage as "baseless".

"We, in the central government, have regularly counselled the Maharashtra state government, made them available all resources and sent central teams for help. However, the lack of efforts of the part of the state government is now clearly visible and come to haunt us all," he said.

The Union Home Minister also slammed all the politicians demanding for opening up vaccination for all ages.

"So long as the supply of vaccines remains limited, there is no option but to prioritize. This is also the established practice around the world, and is well known to all State governments," said Harsh Vardhan.

"The primary aim of vaccination is to reduce mortality among the most vulnerable people, and enable the society to beat the pandemic. Accordingly, the world's largest vaccination drive was launched in India with the first recipients being our healthcare personnel and front-line workers. Once this had progressed to a certain level, vaccination was opened up to further categories and is currently open to everyone above the age of 45 years," he said.

"When states ask to open up vaccine supplies to everyone over 18, we must presume that they have done saturation coverage of healthcare workers, frontline workers and senior citizens. But the facts are altogether different," the Health Minister added.

Besides several Chief Ministers like Uddhav Thackeray and Arvind Kejriwal, Congress MP Rahul Gandhi also spoke in favour of the vaccination drive for all Indians at a time the country is witnessing a massive spike in daily cases.

India registered 1,15,736 new cases between Tuesday and Wednesday mornings, the highest single-day figure since the outbreak of the virus last year.

Earlier, the Indian Medical Association (IMA) on Tuesday sent a letter to Prime Minister Narendra Modi, urging him to make vaccines available for all people aged 18 or above.