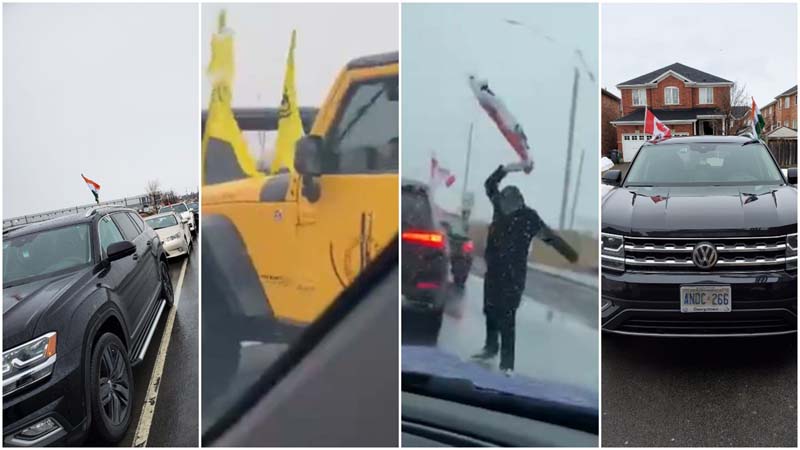 Brampton: A rally organised by Canadian Indians recently to celebrate India-Canada ties was disrupted by pro-Khalistan supporters who were caught on camera  abusing the participants and even insulting the Indian National Flag.

Just to answer any doubt in anyone’s mind. Here is another video of “Khali Stani” goons harassing a peaceful 🇮🇳🇨🇦 rally supporting the bond between two nations.

Members of the Indian diaspora in Canada organised a Tiranga and Maple Car Rally on Feb 28 to mark the strong ties between the two nations.

This is why! Would u expect anyone to call them human?

You must also condemn this openly! These are only 2 videos, if you love 🇮🇳 you won’t b able to see what else they did! pic.twitter.com/i2KYb8n3cx

REACH (Race, Ethnicity And Culture Heritage), the USA and Canada Chapter, posted several videos on their Twitter handle which showed the alleged Khalistan supporters attacking the participants of the rally.

There must be zero tolerance for violence & threats at protests. I was disappointed this weekend to see a video circulating of violence at the Tiranga and Maple car rally. In Canada, we have a Charter of Rights which protects the right to peaceful assembly. pic.twitter.com/pUd3Asfmd1

Brompton Mayor Patrick Walter Brown expressed disappointment over the  incident and said: "There must be zero tolerance for violence and threats at protests. I was disappointed this weekend to see a video circulating of violence at the Tiranga and Maple car rally. In Canada, we have a Charter of Rights which protects the right to peaceful assembly."

The involvement of rogue elements sponsored by Pakistan and so-called sympathisers of the Khalistan movement became evident from the recent violence on the Republic Day in Delhi during farmers' tractor protest rally, media reports said.

Before the rally was held, intelligence agencies had sounded an alarm about the possibility of external elements hijacking it and violence breaking out, reports ANI.

Canadian PM Justin Trudeau had earlier triggered a controversy and earned criticisms from New Delhi for his comments on the farmer's protest taking place in India over three farm laws.

In December last year, Trudeau had extended his support to farmers and their right to protest peacefully, even after the Centre summoned the Canadian High Commissioner to complain when the Candian PM did so for the first time.

Trudeau's earlier support followed coverages of farmers' protest marred with being tear gassed and lathi-charged. "Canada will always stand up for the right of peaceful protests anywhere," he had said.

Trudeau was quoted as saying by the media as: "Canada will always stand up for the right of peaceful protests anywhere around the world. And we are pleased to see moves towards de-escalation and dialogue."

On Jan 26, the situation in India's national capital-Delhi-went out of control after a tractor rally, which was called by the protesters on the evnt of Republic Day, turned violent as several farmers broke police barricades, vandalised government properties and stormed into the Red Fort to implant a Sikh flag, injuring over 100 police personnel and causing the death of one peasant.

Several supporters of farmers' protest openly criticised them on social media over the violence that erupted during their rally on that day.

Even as the Indian government held more than ten rounds of talks with the representatives of farmers but no solution could be reached to the deadlock, as the protesters demanded the withdrawal of the three contentious farm laws and a legal guarantee to the Minimum Support Price (MSP) for their crops.

Despite the comments and controversy created due to Trudeau's comments, Prime Minister Narendra Modi assured him last month  that India would do its best to facilitate supplies of Covid vaccines sought by Canada.

In a tweet, PM Modi wrote: "Was happy to receive a call from my friend @JustinTrudeau. Assured him that India would do its best to facilitate supplies of COVID vaccines sought by Canada. We also agreed to continue collaborating on other important issues like Climate Change and the global economic recovery."

Was happy to receive a call from my friend @JustinTrudeau. Assured him that India would do its best to facilitate supplies of COVID vaccines sought by Canada. We also agreed to continue collaborating on other important issues like Climate Change and the global economic recovery.

The two leaders had an exchange on their respective efforts to fight the COVID-19 pandemic, protect the health and safety of their people, and provide economic support for their citizens.

"Prime Minister Trudeau and Prime Minister Modi spoke about India's significant efforts in promoting vaccine production and supply, which have provided vital support to countries around the world," the Canadian PM's Office informed.

The two leaders agreed to work together on access to vaccines. The leaders also recognized the need for continued global coordination to respond to the pandemic and to promote recovery.

The two prime ministers reaffirmed their common interests in a free and open Indo-Pacific, and the importance of working together on global challenges such as climate change, strengthening global trade, and reinforcing the rules-based international order.

The leaders discussed Canada and India’s commitment to democratic principles, recent protests, and the importance of resolving issues through dialogue. They underlined the need to work collectively in rebuilding a more sustainable and resilient global economy.

The leaders underscored the importance of the Canada-India strategic partnership anchored in shared values, strong people-to-people ties, and growing bilateral economic cooperation. The two leaders looked forward to working together at the G7, G20, and other international forums.

Trudeau even 'commended' the Indian government for its handling of the issue through the path of dialogues, the External Affairs Ministry had said.

Ministry of External Affairs (MEA) spokesperson Anurag Srivastava had told reporters that Trudeau also promised security for diplomatic missions and personnel in his country - against what the Centre claims are "Khalistani and separatist elements" that have hijacked the protest and are conspiring to defame India.

An influential Sikh community is believed to stay in Canada and it is believed that some fringe groups in the country still remain sympathetic towards the cause of Khalistan.

The Khalistan movement is a Sikh separatist movement seeking to create a homeland for Sikhs by establishing a sovereign state, called Khālistān in the Punjab region.

The demand for a separate Khalistan was getting louder in India in 1970s.

Operation Blue Star was the code name of an Indian military action which was carried out between 1 and 10 June, 1984, in order to capture the Sikh leader Jarnail Singh Bhindranwale and his followers hidden inside the buildings of Harmandir Sahib (Golden Temple) complex in Amritsar, Punjab. The decision to launch the attack rested with Prime Minister Indira Gandhi.

Indira Gandhi was assassinated  by her own Sikh bodyguards on October 31, 1984 at her 1, Safdarjung Road residence in New Delhi.

She was killed by her bodyguards more than four months after Operation Blue Star, which was launched on the Golden Temple in Amritsar.