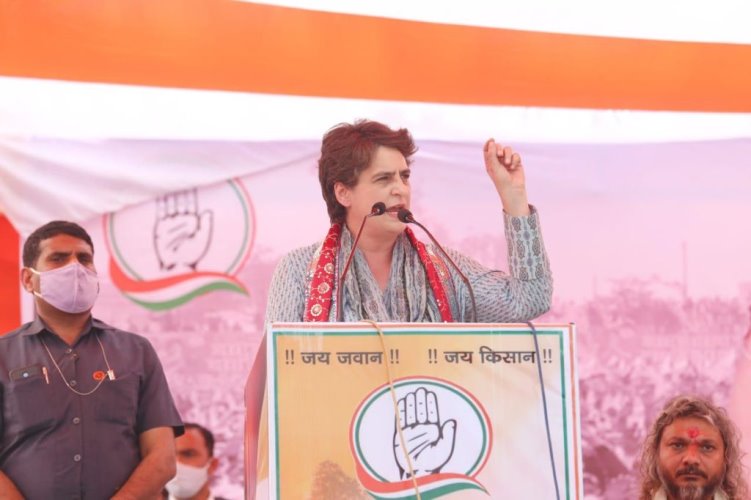 Will bring law to nullify CAA in Assam if voted to power: Priyanka Gandhi

Tezpur/UNI: Slamming the ruling BJP government for imposing CAA, Congress General Secretary Priyanka Gandhi on Tuesday said her party will bring a law to nullify the Citizenship Amendment Act if voted to power in Assam.

“Last assembly elections, they told you that they will protect “Jati, Mati, Bheti” and you voted for them. See what they have done after coming to power. They passed CAA. We will bring a law to nullify CAA in Assam," Priyanka said while addressing an election rally on the second day of her visit to Assam.

“This election is an election of trust. The people of Assam have been cheated by a party five years ago that promised them 25 lakh jobs but gave them CAA instead. The Congress party is not making empty promises but undertaking 5 guarantees,” Priyanka said.

Addressing the public rally at Tezpur which is a tea belt area, Priyanka lambasted the BJP government for luring people before the election by making false promises which were never fulfilled.

Priyanka has given five guarantees to the people of Assam that will be fulfilled if they were voted to power.

The guarantees include a law that nullifies the CAA. 5 lakh government jobs. Raising tea workers’ wages to Rs 365. Free electricity up to 200 units per household; and Rs 2,000 monthly income support to all housewives, she announced.

Explaining the rationale of the five guarantees, she said the party had identified the top issues facing the people through the ‘AsomBasaonAhok’ Yatra and was now presenting its solutions to the public.

With the public rally, Priyanka’s two-day visit to the poll-bound state came to an end. During her two days stay in the state, she met unemployed youths, visited tea gardens and interacted with the tea garden labourers.