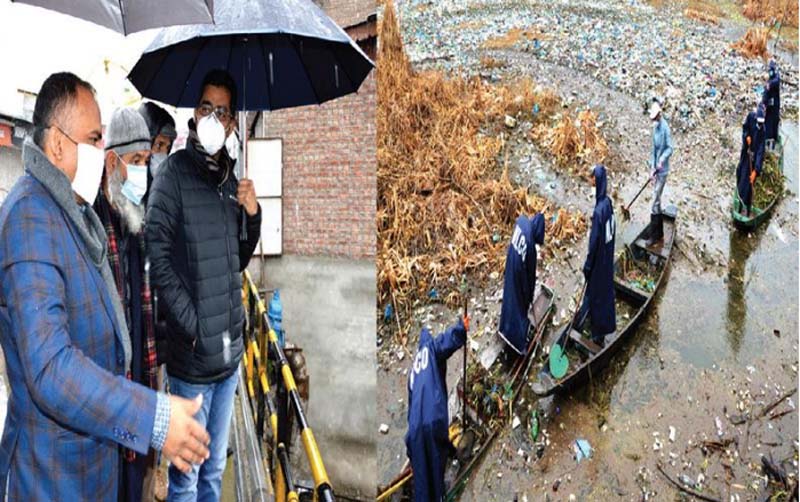 'Pristine glory of Gilsar, Khushalsar will be restored'

On the occasion, the locals met the Divisional Commissioner and apprised him about the dilapidated condition of the lake, turned by releasing of untreated sewage into the water body, throwing of polythene and garbage.

They said that illegal constructions on encroached land of the lake and land filling has also deteriorated the glory of the lake.

The locals demanded that the lake needs immediate dredging to restore it to its original position, besides connecting it with Nigeen Lake via Bota kadal so that its waters remain flowing through the year imperative for saving it from further deterioration and turning into cesspool.

They requested the Div Com to take cognizance of their long pending demand of restoration of Khushalsar a big water body in centre of the city, connected with Gilsar.

The Div Com assured the locals that the Government shall take all the steps to restore the pristine glory of this lake within the shortest possible time. He directed the concerned officers to take immediate steps required for removing of illegal encroachment and land filling besides stopping people from throwing garbage into this historical water body.

The Divisional Commissioner said the lake is having its own history and appealed locals to play their role in its restoration process started by the Government. He asked them to act as responsible citizens and desist from throwing garbage and polythene into the lake and also sensitize others to stop it for their own interests.

On the occasion, Chairman NLCO Manzoor Ahmad Wangnoo, who is cleaning Khushalsar-Gilsar under Mission Ahsaas initiative expressed gratitude to the Div Com for his concern towards restoration of these water bodies.

He requested the Div Com to ask concerned departments press machinery into service to undertake cleaning to Gilsar and Khushalsar.

The concerned officer informed the Div Com that several shops need to be demolished at 90 ft road Soura and at Alamgari Bazar to ensure laying of pipes for providing drinking water supply to various areas of Srinagar city. Among others, Chief Engineers of R&B and UEED, and Joint Commissioner, SMC was also accompanied the Div Com during the visit